Zimbabweans march against EU and US sanctions 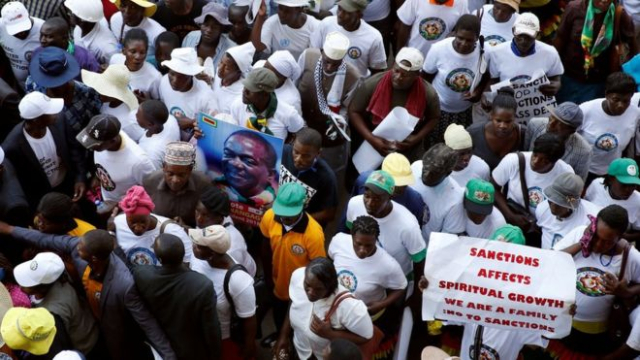 Thousands of people are marching across Zimbabwe in government-organised protests against US and EU sanctions.

The demonstrators say the sanctions have ruined the Zimbabwean economy.

But the US and EU argue they have been imposed on individuals and companies and have no impact on the economy.

The government has made the day a public holiday, provided buses for marches and President Emmerson Mnangagwa gave an address at the National Sports Stadium.

We know very well that the sanctions are neither smart nor targeted,” AFP news agency reports him as saying to the crowds.

“Their impact on our daily lives is immeasurable and the consequences are dire,” he added.

But critics say the government is trying to deflect anger about the worsening economic crisis which has seen increasing inflation and people’s incomes falling.

Protesters wore T-shirts emblazoned with the slogan “#SanctionsMustGo” and carried placards saying the sanctions were a crime against humanity.

Speakers at the stadium said the sanctions were the reason for most of the economic problems that Zimbabwe is facing including power and water shortages.

Our correspondent adds that less people than expected turned up to the main protest, with only 15-20,000 people in a stadium with a capacity of 60,000.

Opposition leader Nelson Chamisa has said the protests are part of a propaganda effort to mask the country’s “failed leadership”.

Zimbabweans are suffering because of failed leadership, corruption, bad governance and rigged elections.Only true REFORMS and a return to DEMOCRACY will fix Zimbabwe”™s woes.The rest is mere propaganda and a hopeless waste of time, effort and money. #stoplying

The US embassy in Zimbabwe tweeted that the fault for the failing economy lies with the government’s “failed economic policies”.

The US financial and travel restrictions currently apply to 85 individuals, including President Mnangagwa, and 56 companies or organisations.

The US also imposed a ban on arms exports to Zimbabwe.

EU sanctions also target specific individuals both within the Zimbabwean government and associated with it.

Travel restrictions and a freeze on assets have been imposed, along with the sale of military hardware and equipment which might be used for internal repression.

Some of the sanctions started 20 years ago but in March the US government added to its list military officials involved in last year’s deadly crackdown on protesters.

DISCLAIMER: The Views, Comments, Opinions, Contributions and Statements made by Readers and Contributors on this platform do not necessarily represent the views or policy of Multimedia Group Limited.
Tags:
EU
Sanctions
US
Zimbabwe