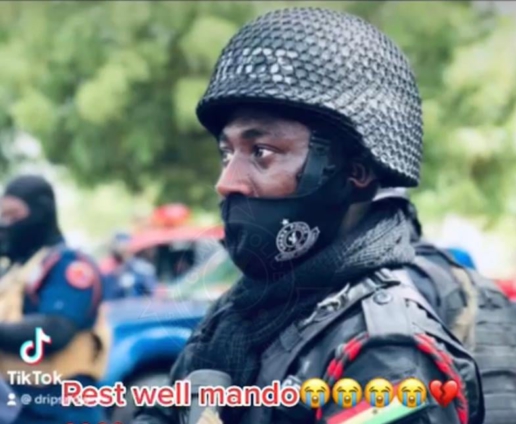 General Constable Adams Sulley who is among the two police officers killed by armed robbers at Zuarungu in the Upper East Region on December 15, has been laid to rest.

The late officer was buried with full Police honours last weekend at the Awudome Cemetary in Accra. The funeral rites were performed at the Transitions Funeral Home in Haatso.

His remains was taken from the Transitions Funeral Home through some principal streets in Accra on Saturday.

Constable Emmanuel Akowuah and Constable Adam Suley met their untimely demise when a gang robbing a business man at the Zuarangu market opened fire at them. The two were on routine patrols.

The bullets fired by the robbers pierced through the fuel tank of a motorbike; causing it to explode into flames and resulting in their deaths.

The solemn ceremony which was conducted in line with Islamic rites was attended by the Inspector-General of Police (IGP) Dr. George Akuffo Dampare, members of the Police Management Board (POMAB), Senior Police Officers and bereaved family members.

On behalf of the Police Service, Dr. George Akuffo Dampare commiserated with the bereaved family. He pledged that the Police Administration will do everything possible to bring the perpetrators of this heinous crime to justice.

Other Senior Police Officers took turns to offer words of condolence to the bereaved family and gave the assurance of their preparedness to offer the necessary assistance to them.