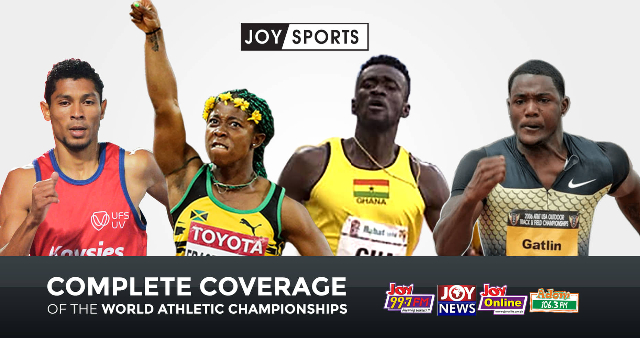 The 17th edition of the IAAF World Athletics Championships will be held in Doha, Qatar for 10 days starting this Friday.

Top athletes selected from over 200 countries and regions will compete in 49 disciplines. Here are six athletes you should keep your eyes on in Doha.

The title of the undisputed Fastest Man in the World remains vacant. Is Lyles ready to inherit Usain Bolt's belt? The American will make some noise, whatever occurs, with his own hip-hop album already in circulation and a sideline in clothes design ensuring that he looks as sharp as he runs.

He has pledged to add the splash of color to the sport that Bolt once brought. "I was interested in what was his way of making people want to watch the sport," he recently told reporters.

"And that's what I believe I took the most from." First things first: emulating the Jamaican's magnetic pull toward gold.

The quickest woman in Europe now wants to conquer the world. The U.K.'s leading light, now 23, underlined her ascent by picking up this year's Diamond League title over 100m.

Expectations and pressure will not bother her. She has ducked under 11 seconds in that event in all but one appearance this summer. But the 200m might be her strongest distance — with her peak potentially still ahead. Amid a crowded field of rivals, nothing is certain, she admits.

Having run only a small clutch of races since returning from pregnancy in July, the six-time Olympic champion will be confined to the relay as she hunts a 12th world championship gold.

Much attention has been centered on Felix's row with Nike over contractual clauses surrounding maternity leave that opened a very public debate. But 11 months after the arrival of her daughter, the 33-year-old will not settle for secondary status, despite funneling her attention toward the Tokyo Olympics.

"Things change a little bit, just with what you want to accomplish, where I'm at in life," she told ESPN.com. "What is most important for me right now, as far as on the track, is definitely Tokyo and preparing for that.

And so, every decision is with that in mind: making sure that I'm at my best to try to make that team."

At the 2017 worlds in London, Echevarria exited quietly in qualifying. It was the latest in a string of poor showings under pressure.

Since then, the 21-year-old has captured the World Indoor and Pan American Games titles while producing a wind-assisted jump of 8.92 meters in March, the longest in the sport in more than 23 years.

After falling just 3 centimeters short of Mike Powell's 1991 benchmark, Echevarria told the IAAF website that a new best is within his range. "The world record is a very difficult mark to break," he said. "But it's not impossible."

Ethiopian-born, Dutch-raised and based out of the Nike Oregon Project, the 26-year-old has collected two world bronzes and has moved up a gear in 2019, setting a world record of 4:12:33 in the mile in July in Monaco and adding a European 3000m best at June's Pre Classic in San Francisco.

So versatile has Hassan become that she has entered three events in Doha. She would be the favorite in each, but the 1500m or 5000m will be dropped from her schedule.

Regardless, two golds seem realistic for her to cap a season in which she has surprised herself.

"At the start of my training for this year was not good," she said last month. "And now it just turned out to be an amazing year for me."

2019 has been a breakthrough year for the 22-year-old. He set his current personal best of 10.01 seconds in Texas earlier this year. The Ghanaian sprinter narrowly missed out on a medal after finishing 4th in the 100 meters final at the 2019 African Games in Morroco.

However, that didn’t deter Amoah as he anchored the Ghana 4×100 men’s relay team, leading them to gold in the same competition.

An athlete carved out for the big moments, Amoah comes into the World Championships with a lot of optimism.

He will be competing in the 100m event and his qualification time currently ranks him as 16th but his eyes will be on reaching the final and possibly winning a medal.

“Usain Bolt inspires me, he is my icon,” he said in an interview at the Africa Games. “I want to definitely do stuff more than what Usain Bolt did.”