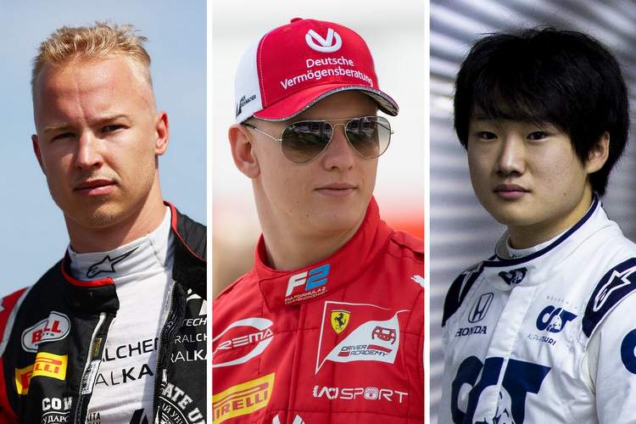 The 2021 Formula 1 season is already underway. Max Verstappen and Lewis Hamilton opened the season with a pulsating duel, which featured a controversial exceeding of track limit by Verstappen, en route to overtaking the 7-time world champion.

Race 1 also witnessed a very intense battle between Ferrari and McLaren. The quartet of McLaren and Ferrari drivers, Norris and Ricciardo together with Leclerc and Sainz finished between 4th and 8th, with Red Bull’s Perez interrupting their streak with a P5 finish.

The mention of Perez, will make it criminal not to mention the extraordinary show he put up. Starting from the pit lane due to technical challenges, Checo fought his way through the 56 lap course, as he glided to his P5 finish.

Put aside the exploits of these regular names on the F1 grid, because three rookies made their F1 debuts at Bahrain. Mick Schumacher for obvious reasons is the most popular of new names on the grid however, there is also the son of Haas team sponsor, Nikita Mazepin and 20 year old Japanese, Yuki Tsunoda.

Besides the Verstappen-Hamilton debate, discussion concerning which of the rookies are bound to have a better season was also rife, and just maybe the 2021 Bahrain GP laid down some ideas.

Yuki Tsunoda finished in P9, after starting in P1 however, bluntly stating his position, will be of great injustice to the pure speed and control the 20year old showed on the grid. It was the kind of humble confidence and desire rarely seen from a racer having his first run on the F1 grid.

A review of how the three rookies; Mazepin, Schumacher and Tsunoda made it to the 2021 F1 grid and their form in pre-season, will surely make this piece a lot easier.

Mick Schumacher formerly of PREMA Racing, finished the 2020 Formula 2 season top of the pile. His accumulation of 215 points was the most in Formula 2 that season, and was also 14 more than his closest competitor, Callum Ilott. Schumacher ended the season with 10 podiums and two race wins.

Fellow rookie on the F1 grid, Yuki Tsunoda finished 3rd in the F2 standings with a point tally of 200, 15 less than Schumacher’s. A Red Bull academy driver, the Japanese was named the F2 rookie of the season and snapped up by AlphaTauri. He ended that season with seven podiums and three wins.

Meanwhile, Nikita Mazepin ended the season, 5th in the standings. 51 points off Schumacher’s top spot and 36 less than Tsunoda’s. The Russian concluded that season with six podiums and two wins and was signed on as a part of Haas’ new all-rookie racer team-up.

So many unusual occurrences this year already took place and with teams having been limited to just three days of testing, unlike the six from last year, this year’s testing added up to it. Max Verstappen took pre-season by storm, finishing in P1 on days 1 and 3, as well as recording the most laps finished – 138.

Testing may not exactly be a strong basis to make pronouncements on the outcome of a season, nonetheless for midfield teams, it can prove to be a measurement of preparedness for the season. This year’s rookies who all race for midfield teams, had their first real taste of the F1 grid at this year’s pre-season testing in Bahrain.

On day one of testing, the Haas pair of Mazepin and Schumacher finished 15th and 16th respectively – 2.071 and 3.4 minutes behind fellow rookie, Tsunoda who finished ninth. The Japanese was 2.053 minutes off the grid’s top speed, set by Red Bull’s Max Verstappen.

The 2nd day of testing saw a drop in the level performance from the AlphaTauri racer, with Tsunoda falling from ninth to 11th, and although Schumacher stepped up his performance, he still fell one short off Tsunoda in day two’s testing classification.

The German placed 12th behind the AlphaTauri racer moving from, 3.4 minutes on day one, to a 0.199 seconds reach of his Japanese counterpart on the second day of testing. On the other hand, Mazepin with a time of 1:33.101 was 0.417 seconds off Tsunoda and still locked to the bottom three finishes.

The final day of testing was no different, as the rookies lined up on the classification table in the same manner they had followed one another since the first day of testing. Tsunoda however, set up his best finish and time in the triquetra days of testing, with his second place finish behind Max Verstappen. Bluntly stating where Tsunoda finished is a disservice to the 20year old, as he was only 0.093 seconds off the pace of the Belgian.

Mazepin and Schumacher made progress of their own, climbing to 14th and 15th , but still further off the pace of Tsunoda. The AlphaTauri driver was 2.478 and 3 minutes ahead of the Haas drivers.

In the three days of testing, the Japanese had made a statement and left an indelible mark, to be further impressed on, on the first race night of the season.

Schumacher might have won Formula 2 in 2020, but his jump to F1 through testing, practice and the Bahrain qualifying were not very impressive. Tsunoda provided more challenge and competition in practice as well as the qualifying sessions.

The Haas pair of Schumacher and Mazepin, did not flatter in their initial races as F1 racers, while Tsunoda on the other hand, was the fastest amongst the rookies, finishing a high 7th in FP2.

Despite his 14th and 13th place finishes in FP1 and FP3, Schumacher and Mazepin still trailed the 20year old. In FP1, the Haas pair shared the last two places amongst themselves, both racers finishing shades above a minute behind the AlphaTauri driver, and although they moved to 19th and 18th respectively in FP3, they still sat behind the Japanese.

In qualifying, the Haas pair were eliminated after the first round, forming part of the five slowest racers in that round. Tsunoda on the other hand made it to the 2nd round of the 3 rounds session and had a lap time of 1:31.203.

Both practice and qualifying sessions looked to have been well gripped by Tsunoda as compared to Schumacher and Mazepin, with the Japanese showing more speed and control on the grid. He also posted the 2nd fastest time in Q1.

Mazepin meanwhile with his spin at Turn 7 during FP3, went more yards off the pace.

The 2021 season officially saw green lights on the afternoon of the 28th of March and despite Verstappen’s pre-season form, Hamilton piped the Belgian to a first place finish.

Tsunoda also basked in the limelight following his show on his official F1 debut. The Japanese won points, finishing ninth despite starting 13th. His finishing position was not his only big thing on the night, as the 20 year old showed a lot of speed and control on the night, gliding and overtaking more experienced racers and even world champions.
It was his particular overtaking of Fernando Alonso which was even more impressive. With an extra 12km of pace in Turn 1, the Japanese overtook the Alpine returnee and two-time world champion.

The Haas racers in review though, had downtimes on the grid. Starting from Mazepin, the Russian suffered an early end to his debut, spinning at the third turn of the first lap. This was the second time Mazepin had spun in two days and the sixth time in a very young F1 career. The 22year old has earned himself the nickname ‘Mazespin’ from fans.

His race partner, Schumacher who debuted 30 years after his father’s first race, did not have things go exactly how they planned. The German just like his Russian colleague, spun but fortunately for him, he was still in the capacity to continue the race and he finished 16th.

Cars – AlphaTauri have a better car

Yuki Tsunoda’s ATO2 also means, the young Japanese has an advantage on the grid as compared to his Haas teammates. The AT02 is an improvement on last year’s car which saw Pierre Gasly win the Italian Grand Prix. It was also the year where AlphaTauri secured their most point tally in a season with 107 points.

AlphaTauri, the sister team to Red Bull, have also incorporated into their car the Honda 2021 power-unit – the engine which has gotten Verstappen and Red Bull somewhat closer to Mercedes this season already.
During the reveal of the AT02, team principal, Franz Tost highlighted that AlphaTauri aim to be at the top of the midfield this season, a very lofty ambition.

At Haas however, their 2020 car piloted by Grosjean and Magnussen, scored just three points last season and due to financial strains suffered from covid-19, there have been very little development on the car for this season.
Team principal, Steiner expressed his pessimism with the effects of changes and judging from Bahrain, his pessimism might actually be sound judgement.

Following Williams’ (who finished last behind Haas in 2020) car developments for 2021, Haas principal, Steiner has predicted his team to finish last in the championship standings this season. Juxtapose his prediction with F1 managing director, Ross Brawn who hailed Yuki Tsunoda as the best F1 rookie in years, following the Japanese’s race at Bahrain.

That is big praise, especially following the debuts of Lewis Hamilton, Michael Schumacher and Ayrton Senna over the years, and it shows the huge respect and admiration people already have for the 20year old.
The Japanese was adjudged the F2 rookie of the year in 2020, despite finishing 3rd behind Schumacher who won F2 that year. That is further proof that the kid is special and will have something on his colleague rookies this year.

Perhaps Schumacher who performed better than his dad did on his debut 30 years ago, still has a point to prove and can do better in the subsequent races, but all things are currently pointing in the direction of Tsunoda and the AlphaTauri.