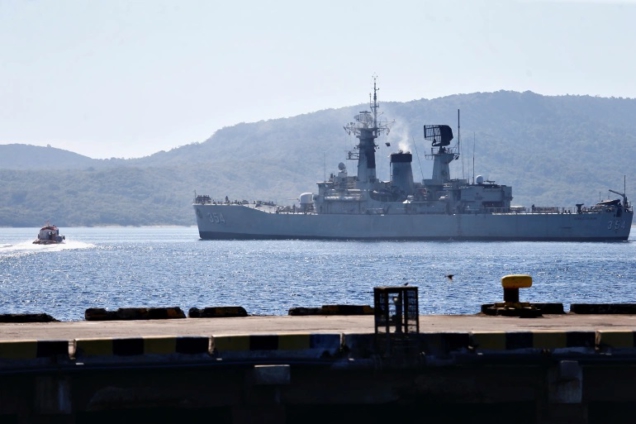 Indonesian officials say debris from a missing submarine was found after the vessel sank as hopes of rescuing 53 sailors on board faded.

The search team on Sunday focused on pinpointing the sub’s exact location. Authorities warned any salvage operation would be risky and difficult in the deep waters.

Singapore’s MV Swift Rescue – a submarine rescue vessel – arrived to aid in the recovery effort, the navy said. Neighbouring Malaysia as well as the United States, India and Australia were among the nations helping in the search.

Items located from the stricken submarine included a bottle of lubricant and a device that protects a torpedo, Air Marshall Hadi Tjahjanto said.

The submarine – one of five in Indonesia’s fleet – disappeared on Wednesday during live torpedo training exercises off the Indonesian holiday island of Bali.

Navy chief Yudo Margono said on Saturday that rescuers found several items, including parts of a torpedo straightener, a grease bottle believed to be used to oil the periscope, and prayer rugs from the submarine.

“With the authentic evidence we found believed to be from the submarine, we have now moved from the sub miss phase to sub sunk,” Margono said.

Authorities said it was unlikely that there was an explosion on board the submarine, Al Jazeera’s Jessica Washington reported from the Indonesian capital Jakarta.

“In that event [an explosion], they would have heard it by now at this stage,” she said, adding that authorities were still exploring the possibilities for medical evacuations.

Officials also said the oxygen supply for its 53 crew ran out early on Saturday.

Margono said a scan had detected the submarine at 850 metres (2,788 feet), well beyond its survivable limits. The submarine is designed to withstand a depth of up to 500 metres (1,640 feet).

“If it’s an explosion it will be in pieces. The cracks happened gradually in some parts when it went down from 300 metres to 400 metres to 500 metres … If there was an explosion, it would be heard by the sonar,” said Margono, adding no bodies were found so far.

The military said it was preparing “to evacuate” the vessel.

“The submarine is found at a depth that is far beyond the crush depth of the boat. There’ll be no survivors at all, assuming that none of those on board managed to escape before it fell below the crush depth,” said Collin Koh, a research fellow at the S Rajaratnam School of International Studies in Singapore who specialises in naval affairs and maritime security.

“The evacuation they’re talking about, I surmise they’re referring likely to the eventual retrieval of the debris or whatever is left of the submarine that can be salvaged, with the hope of at least retrieving the remains of the crew,” Koh told Al Jazeera.

There have been no signs of life from the submarine, but family members have held out hope.

Berda Asmara, the wife of Second Sergeant Guntur Ari Prasetya, said she is still optimistic that her husband survived.

“Nothing is certain yet … The important thing is that we don’t stop praying and hopefully everyone will come home safely and in good health,” she told Al Jazeera.

The vessel was scheduled to conduct training exercises when it asked for permission to dive. It lost contact shortly after.

Indonesian President Joko Widodo said on Sunday he sent his condolences to the families of the 53 crew.

“All of us Indonesians express our deep sorrow over this tragedy, especially to the families of the submarine crew,” he said.

The search focused on an area near the starting position of its last dive where an oil slick was found.

The cause of the disappearance is still uncertain. The navy has said an electrical failure could have left the submarine unable to execute emergency procedures to resurface.

The German-built diesel-powered KRI Nanggala-402 has been in service in Indonesia since 1981 and was carrying 49 crew members and three gunners as well as its commander, the Indonesian defence ministry said.

“I hope my brothers will be found safe and well because they are professionals and they know what they are doing. But the ship can withstand a maximum depth of 300 metres, maybe 500. Any more than that and I don’t dare comment. May God bless them. I am so sorry,” he told Al Jazeera.

Frank Owen of the Submarine Institute of Australia told Al Jazeera that a flood was likely the reason for the sinking of the ship.

“Almost exclusively what causes a submarine to sink is taking on more water, then what the buoyancy can counteract,” he said via Skype from Canberra, Australia.