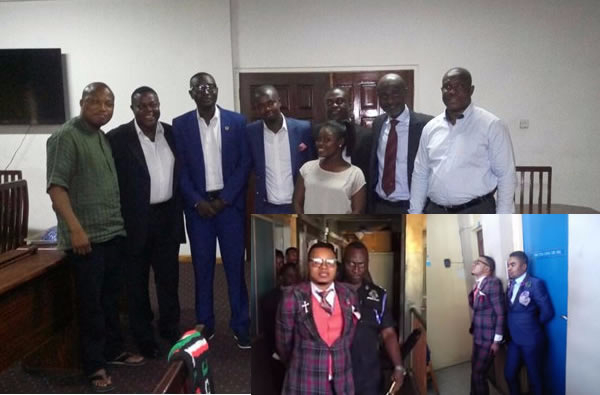 President John Dramani Mahama shocked the nation on Monday by ordering an early release of the three men convicted for scandalising the Supreme Court.

Before this decree was announced, opposition political parties organised a demonstration dubbed: ‘Times are Hard’ in Tamale in the Northern region.

The demonstration coincided with the President’s visit to the three Northern Regions.

Also, the police withdrew their personnel from Donkorkrom where some unrest erupted over the weekend.

Police PRO Superintendent Cephas Arthur gave an excuse that there was no shelter for the personnel after some irate residents set the barracks ablaze. But lawyers said the withdrawal was unlawful.

On Tuesday, the President was panned by a large section of the public for the remission of the prison sentence of three of his supporters, Salifu Maase, Godwin Ako Gunn and Alistair Nelson.

The New Patriotic Party (NPP) said the release was a bad precedent. Some people suggested that the act was a constitutional lawlessness and a complete disrespect to the judiciary.

But Communications Minister Dr Omane Boama insisted the President still had reverence for the judiciary.

A lawyer with the National Democratic Congress (NDC), Nana Ato Dadzie said the President had exercised his executive power by freeing the three.

Head Pastor of International God’s Way Church, Bishop Daniel Obinim turned himself in but was arrested by the police for an alleged fraud.

Some of his indignant followers besieged the Nima Police Station but the pastor spent the night in police cells.

Some Obinim followers at the Nima police station

On Wednesday, lawyer for the embattled pastor, Atta Akyea said the arrest of his client was a diversionary tactic from the Montie 3 remission.

Also, the President while addressing some NDC faithful in the Northern, asked Ghanaians not to risk voting a divided New Patriotic Party presided over by a dictator, Nana Akufo-Addo into office.

And workers of the Electricity Company of Ghana (ECG) declared a three-day sit-down strike to protest the impending concession of the company.

On Thursday, controversial pastor Daniel Obinim was granted bail after spending two nights in police cells. He said the fraud allegation was false.

Also after an assessment to find out if the policies by political parties were measurable and attainable, policy think tank IMANI Ghana described many campaign promises as empty and without substance.

The NPP after questioning the basis for IMANI's assessment, accused the NDC of orchestrating internal wrangling in NPP.

Then on Friday, as was expected, Montie FM presenter, Salifu Maase, and two panelists Godwin Ako Gunn and Alistair Nelson were freed.

The three and one of their lawyers, Eduzdi Tamakloe posed for a photograph after their release

At a welcome rally, the three thanked President Mahama, sympathizers and said they had learned their lessons from the experience.