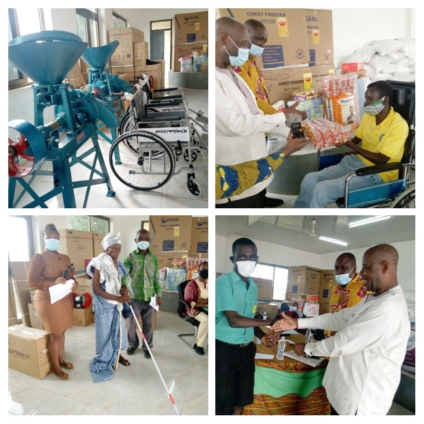 The Ada West District Assembly has disbursed items to Persons Living With Disabilities(PWDs) in the district to enhance their livelihood.

More than 100 persons benefited from disbursements and items funded by the District Assembly Common Fund(DACF).

The Ada West District Chief Executive, Mr Adzoteye Lawer Akrofi, told the PWDs that the Assembly had resolved to make them self-reliant.

“Bring out your talents and hold fast to whatever guidelines we gave you so that together, we would be able to build a beautiful Ada West District,” he entreated them.

The Member of Parliament (MP) for the area, Mr. Christian Corletey Otuteye, told the PWDs to the items and cash to good use.

Madam Abigail Teye, Acting head, Social Welfare and Community Development Department,  Ada West District, said, over GHC 100,000 had been disbursed in two trenches so far in the year to 163 beneficiaries.

“124 persons were supported in cash for farming, petty trading and health purposes.

These items are to establish beneficiaries and also wean them of the fund to ease the pressure on the fund at the district, “She emphasized.

She added that data collected in 2017, identified over 500 PWDs in the district and currently hitting over 700 PWDs with many of them genuinely in need of support from the fund.