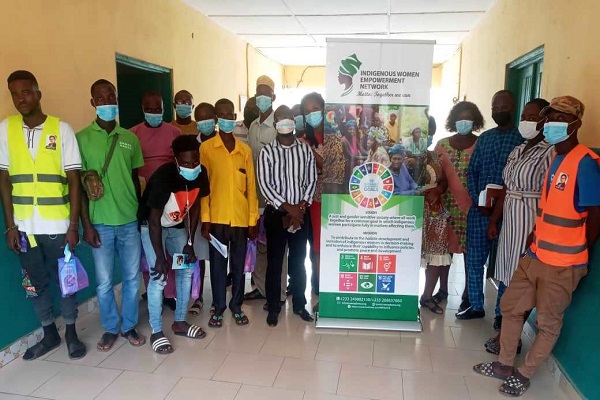 The Executive Secretary of Indigenous Women Empowerment Network (IWEN Ghana) has underscored the need for individuals, government and civil society need to build a more gender-equitable society with healthier gender roles for women and men.

This, according to Celestina Andoh, will make Ghana’s socio-economic development goals such as the Sustainable Development Goals (SDGs) by 2030 more achievable.

She said to be effective, such strategies must not only empower women but also engage men and bring about significant changes in men’s attitudes and practices which are often discouraged by negative notions of masculinity.

Ms Andoh made the observations in a statement made for her during a training session at Sege for 25 men and boys as gender-based anti-violence champions within the Ada West District of the Greater Accra region.

She added there is also ample evidence that gender inequality and the resulting economic deprivation and dependency are fuelling gender-based violence and abuse in Ghana.

“It is common among many communities for women and children to be subjected to gender-based violence and other forms of violence which include, harassment and harmful traditional practices,” she stated.

The Executive Secretary of IWEN Ghana explained that gender-based violence is a widely known problem that is mainly perpetrated by men, community members and individuals who tolerate negative masculine practised widely in Ghana.

According to her, ending violence in communities is a responsibility of the whole community and, significantly, men and boys are active participants and promoters of change to overturn the current status quo.

“That is why through our innovative strategies and with support from Plan International and Global Affairs Canada, we at IWEN Ghana have trained 25 men and boys as gender-based anti-violence champions to help reduce gender-based violence in the Ada West District,” Ms Andoh explained.

The champions, she indicated will be engaging with men and boys to educate their peers on how to prevent violence against girls and reduce risky sexual behaviours.

She further said research has proved that working with men and boys to challenge toxic masculinity and gender inequality has a positive impact on improving the health and wellbeing of women, children and the men themselves.

She said, “it is also critical to combating not only the individual instances of violence but also the systemic forms of violence, since violence does not occur in a vacuum but rather in a society that condones and encourages it”.

Gender-based violence advocate, Raphael Godlove Ahenu, said over the years there have been several deliberate efforts to use women themselves as agents for change to address this problem.

Records, he noted show that such approaches have not yielded the desired results since gender-based violence continues to affect many communities in Ghana.

“As a result, changes have been made such that gender-transformative programmes are now taking into serious account the involvement of men and boys in ending patriarchal norms, gender inequality and gender-based violence,” Mr Ahenu stressed.

The Ada West District Girls Education Officer of Ghana Education Service, Erica Senanu-Sallah said despite the progress Ghana has made in improving access to education for all, there are still challenges preventing thousands of children especially the girl child in Ada West from going to school.

She explained, “adolescent girls face even more challenges and are often denied the chance to complete secondary education due to factors such as poverty, gender inequality, water and lack of sanitation facilities”.

Ms Senanu-Sallah noted that despite the many social and political interventions to campaign against the practice of child marriage, the problem is still going on.

DISCLAIMER: The Views, Comments, Opinions, Contributions and Statements made by Readers and Contributors on this platform do not necessarily represent the views or policy of Multimedia Group Limited.
Tags:
Ada West District
Gender-Based Anti-Violence
IWEN Ghana
SDGs