The leaders of 44 African countries have signed a deal to create one of the world's largest free trade blocs.

The agreement was signed at a summit in the Rwandan capital, Kigali.

It is hoped the deal will come into force within six months, and increase prosperity for 1.2 billion Africans.

But 10 countries, including Nigeria, have refused to sign the deal, and it will need to be ratified by all the signatories' national parliaments before the bloc becomes a reality. 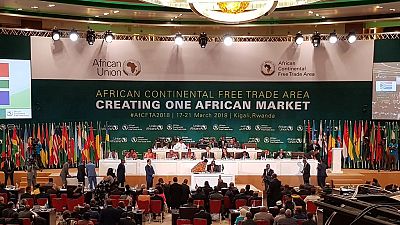 The African Continental Free Trade Area (CFTA) would remove barriers to trade, like tariffs and import quotas, allowing the free flow of goods and services between its members.

In theory that should boost commerce, growth and employment.

He then recognised that to succeed the countries will "need to summon the required political will".

An EU for Africa?

Trade between African countries is relatively low. It accounts for only 10% of all commerce on the continent – compared with 25% in south-east Asia – according to news agency Reuters.

Once the free trade area is established, the ambition is to take further steps that echo the creation of the European Union – like a customs union, a common market, and even a single currency, says Matthew Davies, editor of the BBC's Africa Business Report.

He says many obstacles still have to be overcome.

One is the relatively low level of manufacturing that takes place on a continent where trade often means selling raw materials to the outside world.

Another is getting Africa's largest economy, Nigeria, on board. President Muhammadu Buhari pulled out of the summit, after "certain key stakeholders" – thought to mean trade unions and businesses – complained they had not been consulted.

The African Union said it hoped those countries with reservations would be persuaded to sign at a later date.