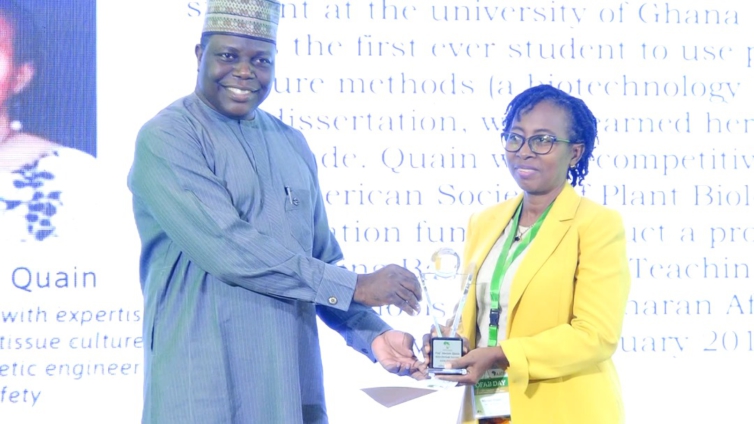 The Open Forum on Agricultural Biotechnology (OFAB) has honoured Africans who have contributed to the accelerated development of biotechnology to increase agricultural productivity in the continent.

OFAB, a project of the African Agricultural Technology Foundation (AATF), awarded the nominees during a ceremony to mark the 2nd OFAB Day, an annual event held in Accra, Ghana, and commended them for their contribution to the prosperity of farming in Africa.

This year’s OFAB Day theme was “The Role of Biotechnology in Achieving Africa’s Development Aspirations”. The theme aligns with AATF’s belief that agricultural biotechnology has a role to contribute to the growth of Africa’s agriculture and food systems.

OFAB, now operating in ten African countries, convenes stakeholders contributing to the biotechnology space to share knowledge and experiences in creating awareness on agricultural biotechnology in the achievement of the African Union’s Agenda 2063, the Malabo Declaration, and the Africa Continental Free Trade Agreement (AfCTA).

The nominees were carefully selected by OFAB chapter countries in consultation with OFAB boards. Retired Tanzania President Jakaya Mrisho Kikwete was one of the African biotechnology heroes awarded for supporting farmers’ rights to access modern agricultural technologies and innovations.

Kikwete’s administration recognized the potential of modern biotechnology in transforming agricultural production and the well-being of Tanzanians. During his first tenure, the government developed and adopted laws and regulations to govern research, development and commercialization of GMOs.

The current President of the All Farmers Association of Nigeria, Arc Kabir Ibrahim, who was awarded for pulling millions of farmers to adopt genetically modified crops through his untiring and firm campaign for GM technology.

Arc Kabir has played a key in the adoption of Nigeria’s first food transgenic crop Pod Borer Resistant (PBR) cowpea, which was just been commercialized into the Nigerian seed market. He has conducted interviews on national television sensitizing the public and Nigerian farmers on the safety and benefits of the application of biotechnology in agricultural production.

In her speech Marian highlighted her unpopular journey of using biotechnology tools to improve crops over years but which is being celebrated today as an important tool to transform Africans Agriculture. Quain thanked AATF for this significant recognition adding that it giver her impetus to innovate more and to better the lives of farmers.

Rwanda Agriculture and Animal Resources Development Board Director-General Dr Patrick Karangwa and Mozambique’s Biotechnology and Inter-Institutional Group on Biosafety Coordinator Dr Roda Sansao Nuvunga, who is also the Director of the Mozambique Water Research Institute were also recipients of the OFAB Day awards.

AATF’s Director, Product Development and Commercialization, Dr Emmanuel Okogbenin, said the cross-section of actors were celebrated for their contribution to the advancement of agriculture biotechnology during their normal lives and activities.

“The nominated policymakers, scientists and farmers have championed biotechnology not for personal gain, but because of belief in its potential to uplift the people’s livelihoods. Through their example, we learn that each one of us, in our areas of expertise and influence can promote the role of science in the Africa’s development,” said Dr Okogbenin.

The STI Director in the Ministry of Environment, Science, Technology, and Innovation, Mr Kwamina Quaison, who represented the minister, said the OFAB Day theme resonates with continental goals at a time Africa is accelerating efforts toward food sufficiency.

“Biotechnology as relatively new science has been met with resistance in Ghana due to lack of understanding and misinformation about the technology in the public. The biggest challenge, which may hold for other African nations, is the knowledge gap between scientists and the public who are the end users of the biotech products,” he said.

Prof Mike Yaw Osei-Atweneboana, Acting Director-General CSIR, Ghana, said since OFAB’s establishment on 18 August 2011, it has consistently facilitated dialogues and conversations to promote the role of STI, particularly agricultural biotechnology toward a prosperous and food-secure Africa.

He urged the nominees to continue supporting agricultural biotechnology development and OFAB chapters in their countries.

AATF is contributing to the wealth and health of Africa’s smallholder farmers, showing how progress is possible when governments, NGOs, the private sector, researchers and farmers work together to unleash technology that targets specific production challenges and opportunities.

DISCLAIMER: The Views, Comments, Opinions, Contributions and Statements made by Readers and Contributors on this platform do not necessarily represent the views or policy of Multimedia Group Limited.
Tags:
AATF
OFAB Day