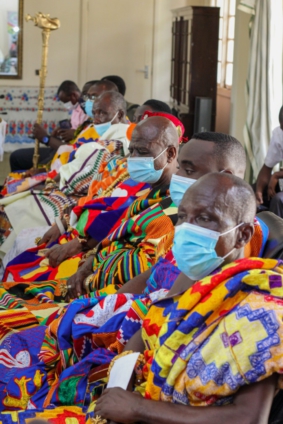 The Ahanta Traditional Council has called on the newly-sworn-in Chieftaincy and Religious Minister, Ebenezer Kojo Kum to help resolve all chieftaincy disputes being recorded in the traditional area to ensure unity in Ahantaman.

The Council made the appeal when some of its members paid a courtesy call on the Minister who doubles as the Member of Parliament for Ahanta West constituency to congratulate him on his appointment.

The Chiefs also wanted to deliberate on pertinent issues with the first legislator of the traditional area to be appointed Minister of State under the Fourth Republic foster growth and development in the area.

Speaking on behalf of Ahantaman’s Paramount Chief, Otumfuo Badu Bonso, leader of the delegation, Nana Etsin Kofi II appealed to the Minister to utilise his new position to address the conflicts being recorded at Dixcove.

In his view, the ongoing dispute being witnessed between Upper and Lower Dixcove is gravely affecting the development of the Ahanta West constituency.

“Candidly speaking, we are very perturbed by the occurrences at Dixcove lately. Residents at Dixcove are our families, they are part of Ahantaman so we entreat you to take drastic measures to resolve the matter.

“You are our son and we promise to support you in whatever way we can to ensure that this matter is settled once and for all. You have exhibited your prowess before and we know you can do it again,” he stated.

On his part, Mr Kum said although he is now the Chieftaincy Minister, he will still need the support of the traditional council to resolve the persistent conflicts in the area.

He suggested that Otumfuo Badu Bonso who is the Paramount Chief of the area must call the two chiefs of Lower and Upper Dixcove to order.

He was optimistic that should Nana Akwasi Agyemang and Obrempong Hima Dekyi be invited for a dialogue, the frequent conflict experienced in the area will come to a definite halt.

“We need peace in Ahantaman and if that peace will come about it will depend on you chiefs as well. So put your house in order. So if there is no peace in Ahanta, it will look as if the work that the President has given to your son has not been welcomed or you are not ready to help him succeed.

So this moment is very critical, it is the time for all of you to support me with your prayers, advice and everything that you can offer for me to discharge my duties to the fullest so that the glory will extend to Ahantaman as well,” he stated.

The Ahanta Traditional Council is a creation by statute under the Ministry of Chieftaincy and Religious affairs.

It is situated at Busua, the Paramount seat of the Ahanta Traditional Area.

Otumfuo Baidoo Bonsoe XV, Ahantahene is the Paramount Chief and President of the Ahanta Traditional Council.

Currently, the council under the leadership of his Royal Majesty plans to move the Traditional council to Takoradi, the administrative capital of the traditional Area.

DISCLAIMER: The Views, Comments, Opinions, Contributions and Statements made by Readers and Contributors on this platform do not necessarily represent the views or policy of Multimedia Group Limited.
Tags:
Ahanta West Traditional Council
Chieftaincy Minister
Kojo Kum