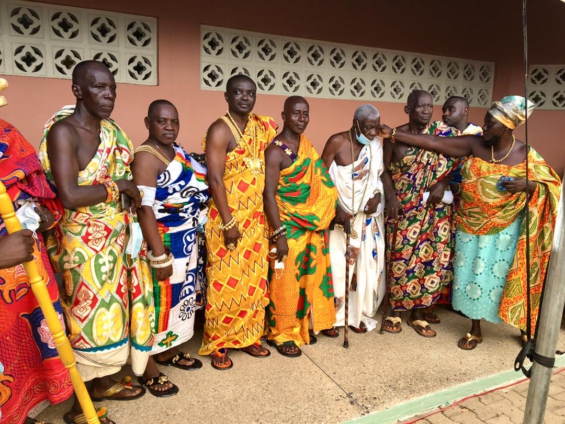 The Chieftaincy and Religious Affairs Minister has called on the Ahantaman King, Otumfuor Baidoo Bonsoe XV to take a firm stance in settling the dispute between Lower Dixcove and Upper Dixcove.

Ebenezer Kojo Kum said this when he was addressing the King and some Ahanta chiefs when he paid a courtesy call on the Traditional Council on Friday.

He legislator highlighted that Otumfuor Baidoo Bonsoe’s action will contribute immensely to bring the long-standing feud to a halt.

“You are the only one who can fix it. And I believe that this will be the greatest legacy you can leave for Ahantaman. And I believe strongly that you can do it.

“A lot has been done already but I know that yours [Otumfuor Baidoo Bonsoe] will be an icing on the cake,” he said.

The Ahanta West legislator further called on the divisional and sub-chiefs of the Ahanta Traditional Area to be supportive of their King’s quest to settle the land dispute at Dixcove.

“Nananom, whether I will succeed or fail, it depends on all of you here. I have always said that, if there is no peace in my hometown, I don’t have any moral right to go elsewhere and try and settle any chieftaincy disputes,” he stated.

On his part, the Ahantaman King pledged to support Mr Kum to take all the necessary steps to ensure peace and unity in Dixcove.

The Ahanta Traditional Council during the visitation installed the Minister as the Abakomahene, meaning, son of a royal.