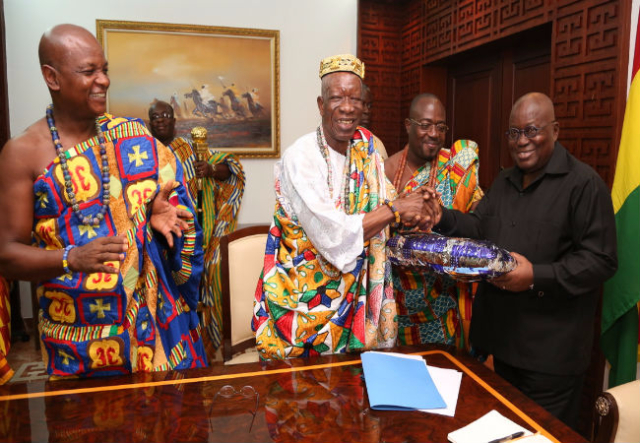 President Akufo-Addo has assured that a solid relationship between Ghana and Togo is one he would seek to advance over the course of his tenure of office.

He revealed that at the just ended 28th AU Summit in Addis Ababa, he agreed with President Faure Gnassingbe of Togo to meet on a regular basis to discuss issues pertaining to the advancement of the two countries.

He was speaking to the President of the National House of Chiefs of Togo and Paramount Chief of Notsie, Togbe Agorkoli IV who paid a “historic” visit to the presidency Tuesday.

This is the first time a chief from Togo has paid a courtesy call on the President of the Republic.

Togbe Agorkoli IV, who was accompanied by the President of Ghana’s House of Chiefs, Togbe Afede XIV and 9 other Paramount Chiefs from Togo and the Volta Region, noted that his visit to President Akufo-Addo was to extend fraternal greetings from the people of Notsie, the ancestral home of Ewes, and the people of Togo, to Ghanaians.

He observed that the decision by President Akufo-Addo to accept his request for a meeting is indicative of the respect the President has for the institution of chieftaincy.

As Chiefs, Togbe Agorkoli indicated that their responsibility is to adhere to the vision of their respective Heads of State and thus, admonished all Ghanaian traditional rulers to extend their full support and co-operation to the government.

He also used the opportunity to invite the President to the well-known Hogbetsotso festival on September 9, celebrated by the people of Notsie.

The Agbogbomefia of the Asogli State, Togbe Afede XIV, indicated that one of the reasons for the courtesy call was because “he was inspired by your pledge and commitment to the Ghanaian people to be a ‘Father for all’.”

The Agbogbomefia of the Asogli State, Togbe Afede XIV

He added that the boldness of vision already espoused by President Akufo-Addo is one which will ensure that all ethnic and religious groupings are united with the common goal of developing the country.

The President thanked Togbe Agorkoli for the courtesy of his visit and reciprocated the goodwill messages extended to him by the King of Notsie.

He further stressed that the relations existing between political and traditional rulers are essential for the well-being of the citizenry.

President Akufo-Addo indicated that his government will do all within its power to ensure relations between these “vital bodies” remain cordial for the forward movement of the country.

He also assured that “unless something dramatic happens, I, together with Togbe Afede XIV and the Chiefs from the Volta Region, am going to be in Notsie for the celebration of the festival on September 9.”