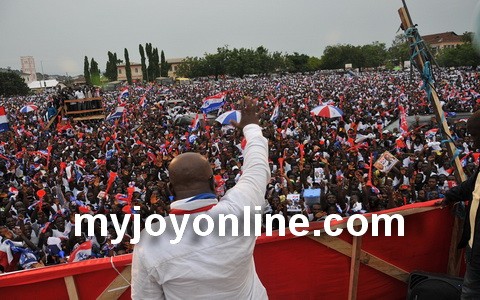 The New Patriotic Party has returned to the Brong Ahafo Region, in a last strategic attempt to win the hearts, minds and votes of the electorates there.

The flagbearer, Nana Akufo-Addo, reminded thousands of supporters how important the region is for the fortunes of the NPP ahead of the December 7 elections.

He was confident, a resounding victory in Brong Ahafo would catapult the NPP to victory in the elections.

Believed to be one of the swing regions in Ghana's elections, president John Mahama polled 51% of the votes in the Brong Ahafo. His closest contender, Nana Akufo-Addo polled 47.% for the NPP.

The NDC's John Mahama later went ahead to win the polls by 50.70% whilst the NPP's Nana Akufo-Addo followed closely with 47.74% of the votes.

With seven days more to go for another election cliffhanger, the parties are making frantic efforts to make final impression on voters in swing regions.

The president, only yesterday went to Cape Coast, another swing region, where he commissioned a number of projects there.

The NPP's Nana Akufo-Addo has made a quick dash to the Brong Ahafo after leaving the Central Region on Monday.

He told supporters, many of whom thronged the campaign ground of the NPP, that the time has come to change the destiny of the country.

He told the electorate that he needed the support of Brong Ahafo to seal a one touch victory for the NPP.

He chronicled the events of 2008, 2012 elections he contested, praying that he will be lucky in his third attempt.

Nana Akufo-Addo won the 2008 election in the first round but did not secure the 50% plus one vote needed to crowned president. He lost in the run-off to the late president John Mills.

In 2012, he lost to president John Mahama in an election which ended in the Supreme Court, after the NPP challenged the verdict of the  Electoral Commission.

The Supreme Court upheld the verdict of the Commission after eight months of litigation.

Nana Akufo-Addo told BA supporters, the time to change the destiny of the country is now and promised policies he said would transform the country.