A small-town Alabama police department this week alleged Beelzebub is responsible for a recent spike in homicides and it’s all thanks to nonbelievers in the rural community.

The Opp Police Department shared the bold opinion on its Facebook page Tuesday. Written in all capital letters, it read, in part:

THIS IS HAPPENING BECAUSE WE HAVE TURNED AWAY FROM GOD AND EMBRACED SATAN. WE MAY HAVE NOT MEANT TO DO SO BUT, WE HAVE. IT IS TIME TO ASK FOR GOD’S HELP TO STOP THIS.

According to the Facebook post, which has since been deleted, there have been five homicides in Opp this past year. It’s a huge jump for a small town which, according to the FBI’s Uniform Crime Reporting Program, reported only two homicides between 2007 and 2017.

The Opp Police Department, in its Facebook post, did not elaborate on the homicides or the alleged motivations behind them. 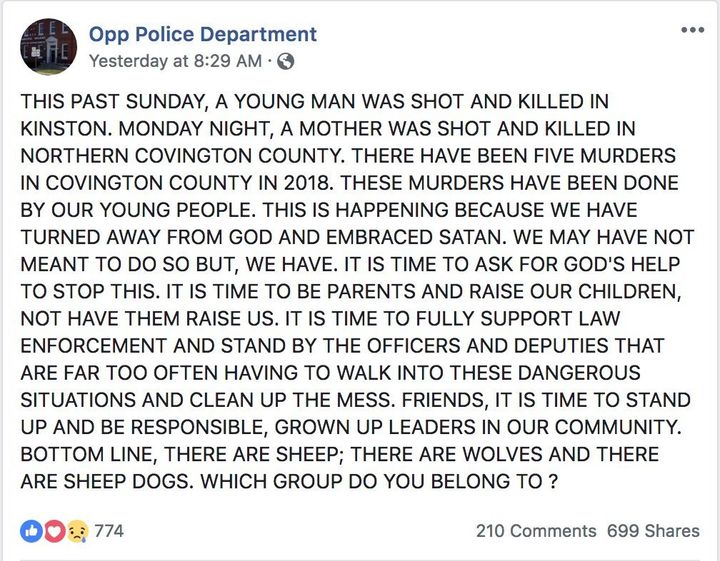 The Facebook post as it appeared before it was deleted, according to the Freedom From Religion Foundation.

The agency provided no numbers on how many residents of the 6,500-person town it suspects of being nonbelievers or whether it plans to do anything about it beyond publicly chastising them.

The post quickly brought the ire of an organization that promotes the separation of church and state. The group pointed out it’s illegal for government entities to endorse or criticize any religious beliefs.

“The department has very directly endorsed one religious ideology to the exclusion of minority religions and atheism, and decried Satanism,” said Sam Grover, an attorney who represents the Madison, Wisconsin-based Freedom From Religion Foundation.

“Neither message is permissible,” Grover added.

The Freedom From Religion Foundation on Wednesday demanded Opp police issue a retraction.

“Police officers take an oath to protect and serve all citizens, including those who practice a minority religion or no religion at all,” said Annie Laurie Gaylor, the organization’s co-president. “This inappropriate post sends a chilling message to non-Christians and non-believers that they are presumed guilty.”

In addition to courting controversy, the post, which went viral, managed to attract numerous trolls to the police department’s Facebook page. Everything that has been posted since Tuesday ”• from weather updates to police calls ”• has resulted in comments jokingly placing the blame on Satan’s shoulders.

Still, of the many unanswered questions is whether Satan is actually working overtime in Opp. HuffPost on Friday was unable to locate the diabolical entity for comment.