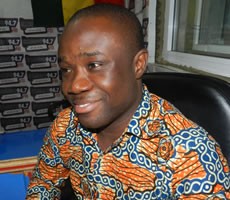 A member of government’s communications team is demanding fairness and consistency from religious and civil society groups on controversial issues that affect the country.

Felix Kwakye-Ofosu is convinced the religious groups are most often heavy handed in criticizing issues involving the National Democratic Congress but only scratch the surface when it involves the New Patriotic Party.

He was commenting on the heated exchanges between members of the ruling party on one hand and members of the clergy on another over the controversial creation of 45 new constituencies.

The Clergy had cautioned the Electoral Commission to proceed cautiously with the creation of the new constituencies fearing it might lead to chaos in December.

They are proposing that the 45 constituencies be suspended from taking part in the December polls until 2016.

But the NDC is unhappy with the intervention by the religious group.

The General Secretary of the NDC Johnson Asiedu Nketia and the Central Regional Director of Communications of the NDC Allotey Jacobs have been vehement in their criticisms of the religious groups.

They claim the clergy only find their voices when the NDC is in power but become quiet when the NPP is in power.

The Presbyterian Church which was directly criticized by the two NDC gurus had its Public Relations Officer also responding, accusing the two men of speaking out of ignorance.

Emmanuel Osei Frimpong accused the NDC scribe of speaking as though he was under the influence of alcohol, a comment he has apologised for.

President John Mahama last week also apologized to the Presby Church Moderator for some of the comments made against the church by some members of the NDC.

But there were renewed exchanges triggered by the deputy Majority leader in Parliament Rashid Pelpuo who stated on Newsfile, Saturday that the Clergy had no business interfering in the controversial matter.

The Chairman of the National Peace Council, Most Rev. Prof. Emmanuel Asante, on Monday described the comments by Rashid Pelpuo as unfortunate.

Speaking to Joy News’ Evans Mensah a member of the government’s communications team said the NDC position has been misunderstood.

He said “the NDC has not attacked anybody for airing his or her opinions” stating it was rather the General Secretary of the NDC who came under attack from a member of the Clergy.

Kwakye-Ofosu regretted the situation in which the Clergy and other Civil society groups descended heavily on NDC on controversial issues but remain quiet on similar issues when the NPP is in power.

He cited the creation of the 30 constituencies in 2004 under the Kufuor administration but which did not generate any such uproar as is happening now.

He said the 45 new constituencies is generating tension only because the NPP is unduly attacking the Electoral Commission and thought that the Clergy and other civil society groups will back the EC on this. But that does not appear to be the case.

He said all the NDC is asking for is fairness and nothing more.