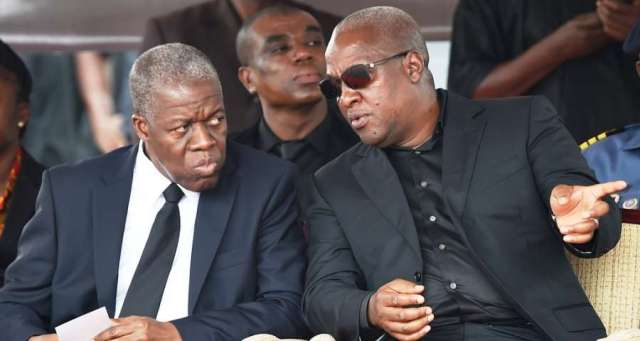 Matilda Amissah Arthur, the wife of late former Vice-President Paa Kwesi Amissah-Arthur, has revealed that her husband rejected the offer to be running mate to John Mahama three times.

She said her late husband was not interested in the role as the family wanted to always have a private life.

She said he, however, bowed to the pressure of delegates including friends impressing upon him to consider the offer after he confirmed through prayer that the move was “the will of God.”

Speaking on CitiTV, the former Second Lady said the late Amissah-Arthur’s initial position was firmly supported by the family who dreaded the idea of being in mainstream Ghanaian politics.

“He [Kwesi Amissah-Arthur] himself did not want to take the job as the running mate of the president and three times he refused the offer. It was the fourth occasion that he agreed and he agreed after we had gone into much prayer and we were convinced that, that is what the Lord wanted him to do.”

Matilda Amissah-Arthur at her late husband’s funeral in 2018

“As a family, we also did not want him to take it…. We are a very private family and therefore we didn’t want to come to the limelight and knowing especially the kind of politics were do here in Ghana, as a family we didn’t want it,” she added.

She noted that many Ghanaians misunderstood her husband while he was in government as the Vice president of Ghana.

Mrs. Amissah Arthur said many expected him to be very vocal on various issues and dominate headlines but because he stayed true to his principles and avoided getting in media debates and discussions, many Ghanaians felt he was not delivering on his mandate.

“My husband was not a mainstream politician. He was a technocrat. Yes, he belonged to the NDC, he was a Vice President for the NDC but he was first and foremost a technocrat who did his work and did it well. Unfortunately, the position of the Vice President, whether you like it or not, is one that doesn’t come to the forefront…At that time, politics was not really as it is today,” she said.

“Vice Presidents do not make headlines but the typical Ghanaian want somebody who goes to the media and who shouts and is everywhere and so because my husband was quiet, will not go to the media, will not shout, for Ghanaians he was not the kind of person they wanted but the people who knew my husband knew his worth and knew who he was,” she added.

The former Vice President died on 29 June 2018 at the 37 Military Hospital after reportedly collapsing at the Air Force Gym during his routine morning workout session.

A year after his death, his family and friends have undertaken a number of legacy projects to celebrate his life and preserve his memory.

A learning centre, consisting of a library and an ICT complex, located at Ohawu in the Volta Region was named in his honour as the family has announced a fully-sponsored PhD scholarship program at the Department of Economics at the University of Ghana in his honour.