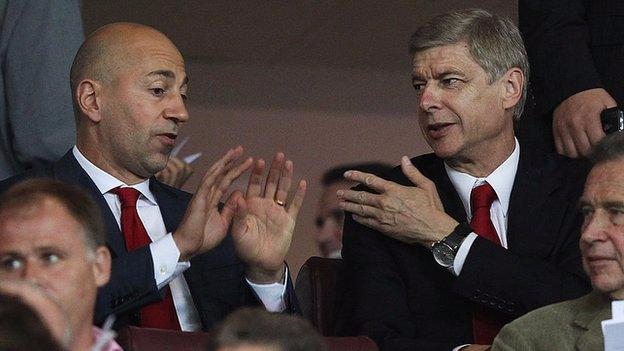 Wenger, 67, signed a new two-year deal with the club in May, despite protests from some supporters, and says Arsenal can win the Premier League next year.

Arsenal won the FA Cup but failed to make the Champions League for the first time in Wenger's reign last season.

"I want the atmosphere to be united," Gazidis said at a fans' event.

"I beg you, please come together and give our manager and this team support."

Arsenal have agreed to sign Schalke left-back Sead Kolasinac on a free transfer and had a bid rejected for Lyon striker Alexandre Lacazette.

Wenger has also said contract talks will take place this summer with forward Alexis Sanchez and midfielder Mesut Ozil, who are entering the final year of their deals.

"We've got three times as many scouts as we had four years ago. I believe that to be a world-class football club, you've got to be world class off the pitch."