At least 3 injured in Bimbila over Damba festival - MyJoyOnline.com

At least 3 injured in Bimbila over Damba festival 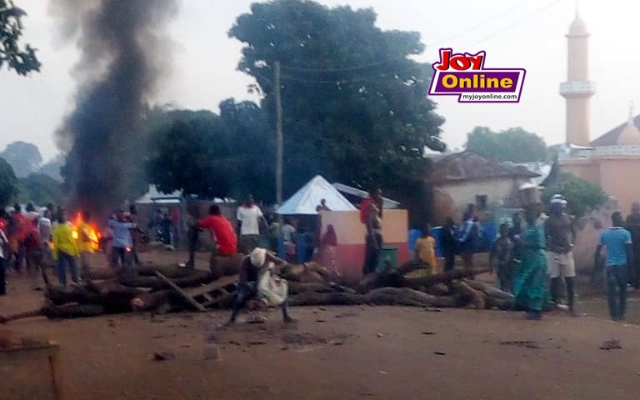 At least three people are reported injured in Bimbila in the Northern region following a violent clash between police and members of the Nakpaa Naa family on Thursday over the annual Damba festival.

Eyewitnesses say police tried to stop the Nakpaa Naa family from going ahead with a ceremony to mark the annual Damba festival, resulting in the clash.

Joy News sources say the Nakpaa Naa family was being prevented by police from celebrating the festival because it was considered an affront to the authority of the Dasana Andani family who a Supreme Court ruling declared as the legitimate heirs to the Bimbila skin.

The Nakpaa Naa family and the Dasana Andani family had been embroiled in a long dispute about who was the rightful heir of the Bimbila skin before the Supreme Court ruling.

The court ruled that Nyelin-Boligu Naa Yakubu Andani Dasana, the Regent of Bimbila, was the legitimate heir to the skin and not Nakpaa Naa Salifu Dawuni. Both factions are members of the Gbugmayili family.

An eyewitness told Joy News that police had a tough time breaking up the Damba festival celebration that had been started by the Nakpaa Naa faction.

The injured, including an eight-year-old girl, are members of the Nakpaa Naa faction who had been taking part in the celebrations.

Police have confirmed the injuries but said they cannot confirm whether the warning shots fired caused them.

Police reportedly used water cannons and teargas to disperse the crowd but failed, an eyewitness said.

The Nakpaa Naa family became furious at the attempt by the police to disperse the crowd and started pelting stones at the armoured police vehicles.

The Nakpaa Naa faction subsequently mounted a roadblock to prevent vehicles from accessing the palace of Nakpaa Naa Salifu Dawuni.

Damba is celebrated to mark the birth and naming of the Islamic Prophet Muhammad, but the actual content of the celebration is a glorification of the chieftaincy, not specific Islamic motifs.

The festival is called Damba in Dagbani, Damma in Mampruli and Jingbenti in Waali.

The festival is celebrated in the Dagomba lunar month of Damba, corresponding to the third month of the Islamic calendar, Rabia al-Awwal.