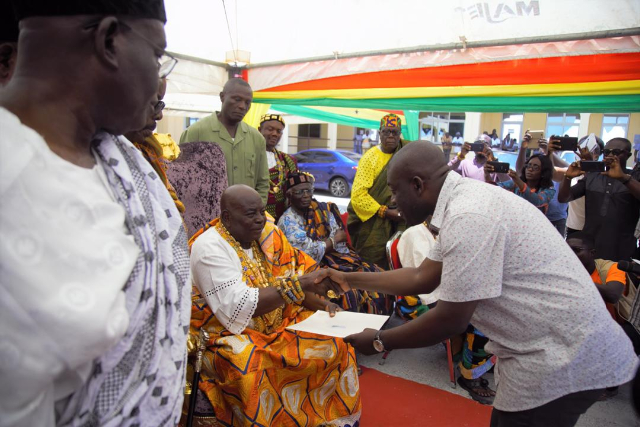 The Awomefia of the Anlo State, Torgbui Sri III, is praying for wisdom from above, to deliver the task of finding lasting peace in Bimbila in the Northern region.

The Anlo chief was commissioned Thursday, by President Akufo-Addo, to mediate in the Bimbila chieftaincy dispute.

Other members of the mediation committee are Minister for Chieftaincy and Religious Affairs, Joseph Kofi Dzamesi and the Northern Regional Minister, Salifu Saeed.

The President announced the intervention for peace during his last tour of the Volta region.

The Bimbila conflict is reported to have erupted in 2001 following a misunderstanding in the selection of a successor for the late Bimbilla Naa, Abarika Attah II.

This development disrupted peace and impeded security in the area for over 18 years, though several attempts have been made to restore peace.

Bimbilla continues to endure curfews due to bloody disagreements despite a court verdict in May 2018, declaring one of the factions, the Dasana family as rightful heirs to the skin.

The Naa Dawuni family was dissatisfied with ruling and has been calling for a committee to mediate.

Government following the request, appointed the Awomefia of the Anlo State, Torgbui Sri III who has a background in conflict resolution, peace-building and security, to mediate and bring peace to the area.

Accepting the responsibility placed on his shoulders, Togbe Sri, a renowned conflict resolution expert promised to employ both expertise and “the wisdom of God” to resolve the matter.

“I am not surprised the President appointed me, because this is what I studied and do. I have done this in Namibia, Cambodia and South Africa. I was flown from South Africa to mediate in the Tamale conflict, which I did to expectations. I pray God gives me the wisdom to mediate the Bimbila conflict,” he said.

The Northern Regional Minister Salifu Saeed bemoaned the adverse effect the conflict had caused the Bimbila area but said the state has confidence in Torgbui Sri to help bring lasting peace to the area.

The Information Minister, Kojo Oppong Nkrumah, presented the appointment letter to Torgbui Sri on behalf of the president.

The National Security Minister Albert Kan-Dapaah and the Volta Regional Minister, Archibald Letsa, Volta Regional NPP Chairman, Makafui Woanyah and others were part of the delegation.