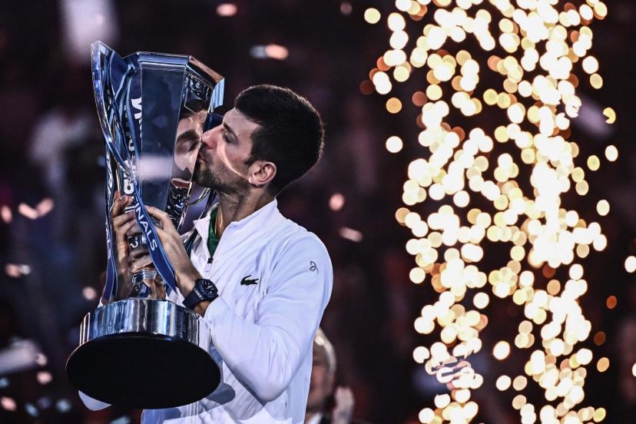 The 35-year-old Serbian overcame his Norwegian opponent 7-5 6-3 in Turin on Sunday.

Victory for Djokovic in the season-ending event caps a year in which he was forced to miss two majors because of his reluctance to take a Covid-19 vaccination.

He last won an ATP Finals title in 2015 and has matched Roger Federer’s mark.

Having sealed the success with one of nine aces in the match, he said the seven-year wait for the title made the triumph “even sweeter”.

“It feels deeply satisfying and, at the same time, a huge relief because of the circumstances that I have been through this year, situations earlier this year, of course, with Australia,” added Djokovic.

“That had an effect obviously on my start of the year. For the first several months, I was trying to find that balance game-wise but also mentally in order to be able to come back to the court and find that tennis level that I need.

“I don’t know what the future holds but I know that what I hold in my mind is a huge hunger still to win trophies.”

Ruud, 23, made two poor errors to hand the 21-time major winner the break in the first set.

Having won the opener, Djokovic then took control and broke his opponent’s serve in the fourth game of the second set.

Ruud continued to battle and forced the veteran into a 36-shot penultimate rally, but Djokovic was stronger and closed out the match with a powerful ace.

It marked another final defeat for the Norwegian who was runner-up at both the French Open and US Open.

But Ruud said: “Overall, if you gave me the offer to end the year at number three, play the finals that I’ve played, on 1st January this year, I would probably sign the contract right away. No doubt about it.”

It was also a successful day for Britain as Joe Salisbury won the men’s doubles event with American partner Rajeev Ram.