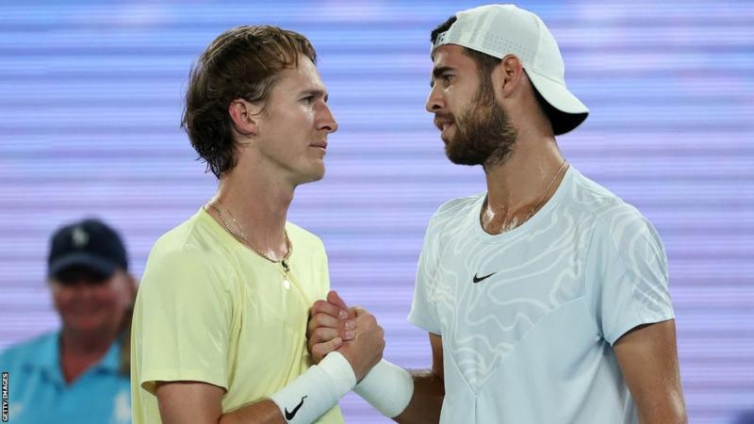 Russian Karen Khachanov will contest his first Australian Open semi-final after Sebastian Korda was forced to retire with a wrist injury.

Korda was growing into the match when he began to struggle with his right wrist, taking a medical timeout midway through the second set.

“Obviously it’s not the way you want to finish the match,” Khachanov said.

“Until a certain point it was very competitive,” he added. “Sebastian beat one of my friends, Daniil [Medvedev] in three sets and [Hubert] Hurkacz in five. He’s playing great tennis.”

After losing the first three games of the third set a visibly disappointed Korda sat down briefly at the change of ends before walking over to shake Khachanov’s hand.

Korda, the son of 1998 champion Petr, then left the stadium to a standing ovation.

Khachanov will play either third seed Stefanos Tsitsipas or rising Czech star Jiri Lehecka for a place in Sunday’s showpiece.

Khachanov started strongly but failed to serve out the opener at 5-3 before taking his third set point of the eventual tie-break with a clinical backhand winner.

After a slow start Korda had grown more competitive but he faded badly after receiving treatment five games in to the second set.

The swift loss of the set followed – although Korda did create two break points as Khachanov briefly tightened up when serving for a 5-3 lead – but the decision was made for the American when he was only able to take a single point from the first three games of the third.

DISCLAIMER: The Views, Comments, Opinions, Contributions and Statements made by Readers and Contributors on this platform do not necessarily represent the views or policy of Multimedia Group Limited.
Tags:
Karen Khachanov
Sebastian Korda