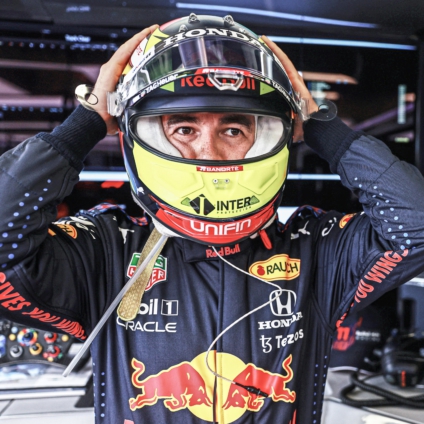 Max Verstappen lost victory to a late puncture in a dramatic finish to the Azerbaijan Grand Prix that also saw Lewis Hamilton throw away a chance to reclaim the championship lead.

Red Bull’s Sergio Perez won the race from Aston Martin’s Sebastian Vettel and Alpha Tauri’s Pierre Gasly in a two-lap sprint to the finish when the race was stopped after Verstappen crashed out with five laps to go. 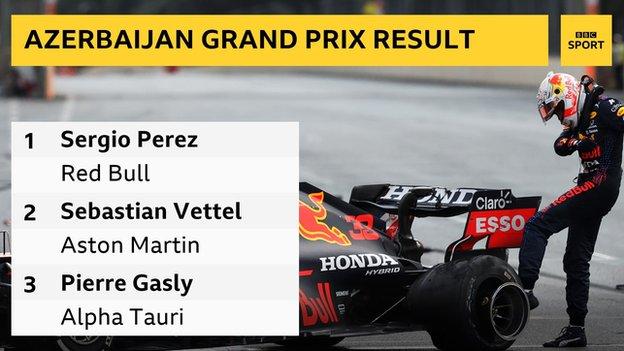 Hamilton took the restart second on the grid and was ahead of Perez into Turn One but locked up his tyres and ran into the escape road, dropping to 15th at the flag.

His uncharacteristic error meant Verstappen retained the championship lead by four points from the Mercedes driver.

Verstappen had dominated the race after passing Hamilton during the pit stops only for his hopes to explode with his left-rear tyre on the pit straight with five laps to go.

Verstappen crashed heavily in an almost identical incident to one suffered by Aston Martin’s Lance Stroll at half-distance.

And the accidents to Verstappen and Stroll, both of whom were uninjured after smashing into the wall after their tyres failed at close to 200mph, will raise questions about the integrity of Pirelli’s tyres – not for the first time since the Italian company came into F1 in 2011.

Verstappen’s late retirement brought out the red flag and led to a chaotic two-lap sprint to the finish.

Ironically, Hamilton had referred to the long season and his fight for the championship with Verstappen in a radio message just before the restart.

“Gotta remember this is a marathon not a sprint, so you’ve got to be measured in how aggressive you go,” Hamilton said.

But when he took to the grid, Hamilton’s front brakes were smoking and after getting the jump on Perez at the start, he locked up heavily and sailed into the escape road, a golden opportunity to retake the championship lead thrown away.

After the race, Hamilton asked: “Did I have the magic on?” Race engineer Peter Bonnington replied: “Yeah, you knocked it on, bud.”

The ‘magic’ button switches the brake balance for warming the front tyres up on the formation lap and under safety car. That means Hamilton would have had excessive front brake bias, which he was not expecting, and would have caused to the lock-up. It seems Hamilton had accidentally knocked the button after switching it off before the restart.

A snore-fest, then a massive drama

Verstappen had controlled the race throughout once he and Perez passed Hamilton at the pit stops.

Fresh from his convincing win in Monaco two weeks ago, the Dutchman was disappointed to miss out on pole position after Red Bull looked the fastest team throughout the weekend.

Leclerc converted pole into a lead at the first corner, only to be passed by Hamilton at the end of the first lap.

Hamilton might have been expected to pull away once in the lead, given the Mercedes’ strength during races so far this season, but he did not gain ground on Leclerc and by lap six Verstappen was in second place and pressuring Hamilton.

Mercedes took the opportunity to pit Hamilton first, trying to protect their lead, on lap 11, with Verstappen pitting the next time around.

Hamilton was delayed leaving the pits because Mercedes had to wait to release him as Gasly came in, but Verstappen’s lead was so big after he emerged from his stop that it was obvious the Red Bull would have passed him anyway.

Worse for Hamilton, Perez stopped a lap later than Verstappen and his pace during the two laps he stayed on track was enough to vault him ahead of the Mercedes.

Hamilton stayed close to the Mexican for the rest of the race but was unable to get quite close enough to pass.

Hamilton’s team-mate Valtteri Bottas had a nightmare day, failing to make any progress from his 10th place on the grid in the first part of the race and then being passed by a series of other drivers who pitted for fresh tyres during the safety-car period to finish in 14th place.

Vettel back to his best

Behind the top three, Vettel revived memories of his best days with a superlative drive in the Aston Martin.

The four-time champion, dropped by Ferrari at the end of last season after a troubled time at the Italian team, ran long in his first stint, keeping his pace strong, to lead the race for five laps after the leaders stopped.

That put Vettel up to seventh place after the field had settled down following the stops, with team-mate Stroll staying out on his hard tyres in fourth place.

When the race re-started after Stroll’s frightening crash, caused by a left-rear puncture at 180mph on the pit straight, Vettel passed both Leclerc and Gasly to take fourth place before Verstappen’s incident.

That became second following the drama that befell Hamilton and Verstappen in the closing laps.

Leclerc was unable to replicate his qualifying pace in the race and fell back to finish fourth, ahead of McLaren’s Lando Norris and Alpine’s Fernando Alonso, who grabbed sixth from Alpha Tauri’s Yuki Tsunoda around the outside of Turn Five at the final restart.

Vettel gets this for a great drive in the Aston Martin, in which over the last two races he has truly rediscovered his mojo after a difficult final three years at Ferrari.

From the drama of Baku to what is normally the tedium of Paul Ricard, which hosts the French Grand Prix in two weeks’ time. Mercedes will look at it as an opportunity to recover the form they showed on more conventional race tracks earlier in the season.