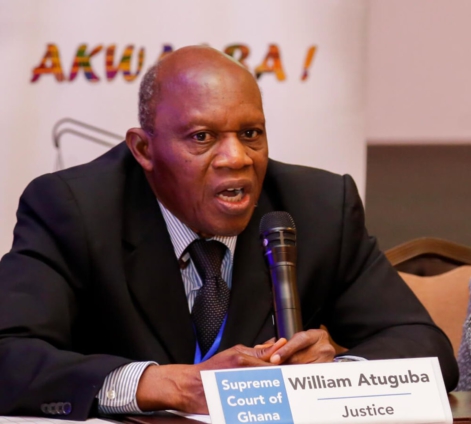 Retired Supreme Court Judge, William Atuguba has asked all sides involved in the 2021 election petition to be guided by the supreme interest of the nation.

Speaking in an interview with JoyNews on Tuesday, Justice Atuguba who presided over the panel that heard the 2013 election petition said that participants involved in this year’s petition should prioritise the interest of Ghanaians and the justice system in the country.

He noted that the citizenry is the sovereign proprietors of powers of the country and must be put first in the hearing of the case.

“I do not think I am in a position to advise the panel, that can be a delicate matter, so I ought to set a good example. However, generally, anybody involved in that process should remember that it is an exercise in the interest of the justice system and the interest of Ghana.

“These are the only two things; so whether you are a lawyer or not, if you look only at these two principles, and allow your conscience and the fear of God to direct you, when the outcome is pronounced, everybody will be happy.”

The retired judge also emphasized that adjudicating issues as delicate as electoral disagreements require individuals who are steadfast and have the interest of the country at heart.

Comparing mathematics to law, Justice Atuguba said, “Law is not mathematics which has uninfringeable answers. 1+1 is always 2, but when it comes to the application of law it is a bit nebulous. So many principles come to play; broad principles, the letter of the law amongst others.

“So it is not an easy thing, however, much of it can be simplified if one fixes one’s mind on trying to ascertain in the interest of this country how the justice of the matter should be.”

Meanwhile, the Metropolitan Archbishop for Cape Coast, Charles Palmer-Buckle has spoken against undue criticism targeted against the judiciary.

According to him, it could obstruct the work of the Supreme Court, especially at a time where an electoral petition is being heard.

He insisted that the institution must be allowed to do its work and its decision must be respected in the end.

The National Democratic Congress’ (NDC) flagbearer, John Dramani Mahama has petitioned the Supreme Court to order a second round of the December 7, election.

According to the former President, the votes obtained by New Patriotic Party (NPP) candidate, President Nana Akufo-Addo and himself in the December 7, election as declared by the EC Chair were not enough to be declared winner.

“The percentage attribute to all but one of the other candidates by Mrs Jean Adukwei Mensa were all incorrect,” he said.

The former President argued that if all the valid votes for all the candidates who contested the election are put together, it would total “13,121,111, a figure that is completely missing from the purported declaration by Mrs. Jean Adukwei Mensa on December 9, and the purported rectification on December 10.”

Mr Mahama said the percentage of all the valid votes for the 12 contesting candidates “would yield a total of 100.03%.”

This he said is a “mathematical and statistical impossibility, a further proof of the wrongfulness and unconstitutionality of the purported declaration.”