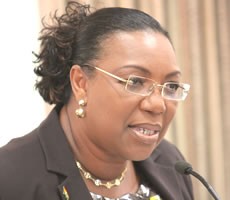 Former Attorney General and Minister for Justice, Mrs Betty Mould Iddrissu has appeared before the Public Accounts Committee (PAC)to respond to issues that have come out of settlement of €94 million paid to Construction Pioneers.

The former Attorney General continued from where she left off last week by launching a scathing attack on the committee specifically singling out Isaac Asiamah, MP for Atwima Mponua who she said had been unjustifiably maligning her.

She and her counsel Nana Ato Dadzie asked that Mr Asiamah recuse himself from the committee’s sitting.

Mr Asiamah said Mrs Iddrisu’s allegations leveled against him last week were false. She had accused him of describing her actions in respect of the 94 million Euro payment to CP as fraudulent but he said she had misrepresented what he said. Wagging the Parliamentary hansard, Mr Asiamh said he used the word flawed in describing a document but Mrs Iddrisu said he used the word fraud.

Mrs. Betty Mould Iddrissu however maintained that Mr. Asiamah is taken off the committee before the hearing could proceed.

The Chairman of PAC, Mr. Kan Dapaah however stated that he does not have the power to take out a member on the committee adding that such powers is vested in the Speaker of Parliament, Joyce Bamford-Addo.

Mr Ackumey however apologised profusely and pleaded not to be thrown out of the hearing.

Kan Dapaah asked the former AG to clarify the fact that Yamoransa-Assin Praso road, Akim Oda road projects which CP were given claims for were never constructed by the company.

The former AG however maintained that the total amount paid to CP encompassed mobilization, demobilization costs incurred by the contractor.

According to Kan Dapaah, a global settlement figure of €162 million contained a €102 million figure which CP were claiming for roads which no construction works were actually carried on.

However CP requested for a stay of proceeding at international arbitration on the €102 million for which no construction work was done.

The former AG and his counsel who had earlier requested for a break of ten minutes were finally given their wish after a bout of questions.

When Mrs Mould Iddrissu and her team of lawyers resumed, they asked that the committee sitting be deferred so that they could prepare adequately for the committee.

The Chairman of PAC concurred with the former AG adding that in the absence of any urgent question that sitting would have to be adjourned to Thursday.