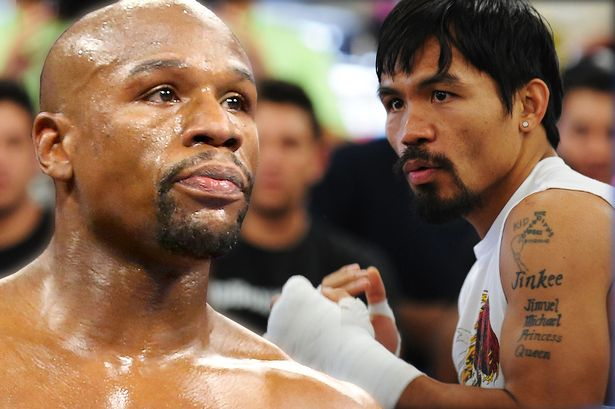 Ghana's two most popular local boxers have weighed in on the most popular global boxing debate currently: Mayweather or Pacman?

The two local boxers themselves captured the imagination of Ghanaians with braggadocio in the lead up to their own heavily hyped bout last year, which Banku won.

Powers has made a curious choice, going for both Floyd and Manny!

"The two boxers are both very good but thing is I think Mayweather can knock out Pacman and Pacman can also win on points. That's my opinion," Powers said.

Powers is the reigning West Africa Boxing Union (WABU) Light Heavyweight belt holder. Surely, he knows there should be one winner in an anticipated bout such as this?

"If there will be a knockout will happen then its Mayweather who can knockout Pacman but if someone will win on points, then i think the victor will be Pacman because Pacman has plenty hands and Mayweather too knows how to defend.

"So the thing is knockout is going to be on Mayweather and points goes to Pacman," Powers elaborated.

As for his nemesis Bukom Banku, he was clear as to who would prevail.

The undefeated Mayweather has long been a hero for the undefeated Braimah Kamoko and it's no surprise the Accra-based boxer chooses the American.

"He is mentally strong [and] on that day I will be supporting him."

Bukom Banku was speaking to Sports Crusader while Powers spoke to All Sports.

For a fight like that, the support bases globally are well drawn. Not for Ayitey Powers, though, who is clearly bent on confusing everyone.

"Mayweather is not afraid of punch and he knows how to defend too but I am supporting the winner, I am not against Mayweather or Pacman, I'm supporting both of them."

For Braimah Kamoko, his only wish is that he can be there to witness it live. "I wish I can even travel to America to see that fight, because it is the biggest fight in the world."

It takes place on May 2.