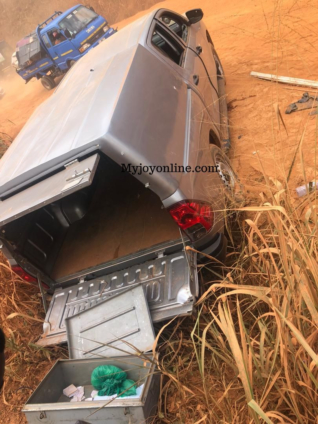 The Circuit Court in Accra trying six alleged robbers, including five Police officers, says it would strike out the case if the prosecution delays the process.

The judge said on the next adjourned date that, if the prosecution fails to comply with its orders for the trial of bullion vans and street robberies to continue, it would strike the case out.

The presiding judge said the delay is worrying, and the incarceration of the accused is inconsiderate, and adjourned the case to June 28, 2022, for a Case Management Conference or the possible start of the case.

Constable Ibrahim and Constable Ofosu, aka, Cypher, have pleaded not guilty to the charge of attempted robbery. Their accomplice, Baba Zakari, aka Rasta, a mechanic, and a civilian, together with the five, were all in court on Monday.

The Court has ordered the prosecutor, Deputy Superintendent of Police (DSP) Sylvester Asare, to file disclosures and witness statements and serve the six accused.

Defence counsel– Justin Terriwajjah, David Bondorin, Jango Huhu, Devine Dotse Tettey, and Andrews Kudzo Vortia prayed to the court to grant their clients bail but the request was refused by the court.

DSP Asare had told the court that General Constables Yaro, Fosu, Boadu, Rabiu, and Tettey are Police recruits and friends, whilst Zakaria is a motor mechanic.

The prosecution said in 2021, the Police recorded series of bullion van and street robberies within the Greater Accra region and mounted surveillance.

DSP Asare said on February 22, 2022, the Police had a tip-off that armed men attacked a bullion van at North Kaneshie.

DSP Asare said further investigation led to the arrest of the accused.

He told the court that the Constables, including the deceased, after their basic training, were posted to the National SWAT Unit, Police Headquarters, whilst Tettey was posted to the Rapid Deployment Force [RDF], in Wa.

DSP Asare said that Yaro, Fosu, Rabiu, and Tettey, when posted to their respective units, underwent tactical and specialized weapon training to enable them to discharge their functions, which included escort and protection of bullion vans.

He said that in February, 2022, the accused, including their deceased colleagues and those at large, agreed, attacked, and attempted to rob Mon-Tran Ghana’s Bullion Van.

DSP Asare said they shot into the bulletproof van with AK 47 Rifles and used Royal motorbikes alleged to be Tettey’s, which were ridden by their accomplices at large.

The court heard that Boadu’s duty was to monitor the van and feed the gang with information.