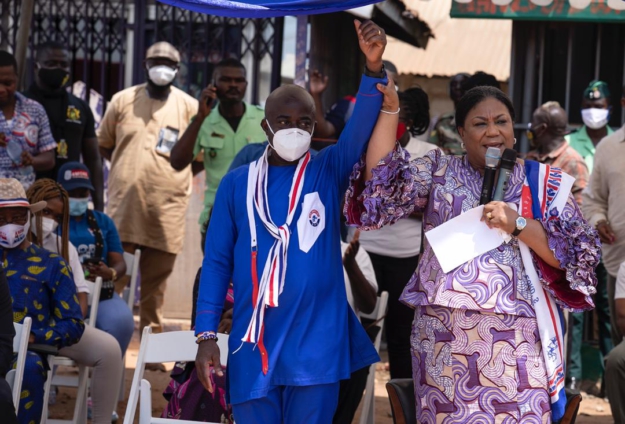 First Lady of the Republic, Rebecca Naa Okaikor Akufo-Addo has urged residents of Ningo Prampram to vote for the New Patriotic Party’s (NPP) parliamentary candidate to catalyse the constituency’s development.

She stated that although the constituency has maintained the NDC in parliament over the past twenty-eight (28) years, Prampram could not boast of any substantial development in their area.

Mrs. Akufo-Addo made these comments in her interaction with the residents of the constituency while on a tour of the area to canvass votes for the NPP.

The First Lady also attended a rally at Dawhenya and Ahwiam, all in the Ningo Prampram constituency where she met party faithfuls and introduced the NPP Parliamentary candidate for Ningo Prampram, Alexander Martey to the people.

She told the gathering that though the NPP has never won the Ningo parliamentary seat since the start of the fourth republic, significant projects executed in the constituency happened under NPP governments.

Under this Akufo-Addo-led administration, Mrs. Akufo-Addo said Ningo Prampram has benefitted from the 1 District 1 Factory (1D1F) initiative, including 3 factories in the constituency, the construction of the largest greenhouse in West Africa, a new market, the extension of electricity in the area and the construction of storm drains.

Member of Parliament for Ablekuma North Hon. Nana Akua Owusu Afriyie who accompanied the First Lady on her tour told the residents to consider the many social intervention policies that have been implemented under various NPP governments.

She mentioned the National Health Insurance Scheme under President Kufuor and Free SHS, the recent reliefs in utility bills under President Akufo-Addo which they have benefitted from.

She urged them to consider these and vote accordingly.

As part of her tour, she also paid a courtesy call on the Chief of Dawa and his elders at his palace and thanked them for all their prayers and support for the Akufo-Addo government and pleaded with them to lend their support as the NPP seeks another term in office to do more.

The Chief of Dawa, Nene Tettehwayo Duamor XI expressed his satisfaction with the current NPP administration.

He added that even though the people of Ningo Prampram including Dawa have never elected an NPP parliamentarian before, there is no doubt that they have benefitted immensely from policies implemented by the government.

In his view, the Free SHS is a lifesaver as it had come to address a critical challenge in the constituency and will without a doubt break the vicious cycle of poverty.

Nene Tettehwayo Duamor Xl assured the First Lady of his people’s unflinching support for the Akufo-Addo led government and their determination to ensure that the NPP parliamentary candidate, Alexander Martey represents them in the next parliament.

The tour ended with a durbar held in her honour at lower Prampram which was graced by the Acting President of Ningo Traditional Council, the Chief of Ningo Nene Wakah Atiapa III and other traditional leaders.

In his address, Nene Wakah Atiapa III said the time has come for the people of Ningo-Prampram to change their parliamentarian from NDC to NPP.

He promised that the people of Ningo Prampram will vote massively for the NPP’s Alex Martey to send a clear signal to politicians that they cannot be taken for granted.

The First Lady promised to escalate their request for fishing landing sites at Ahwiam with the relevant authorities, and for the constituency to be divided into two because of its vastness.

She also reminded them of the threat Covid-19 posed and urged them to maintain strict adherence to the safety protocols.