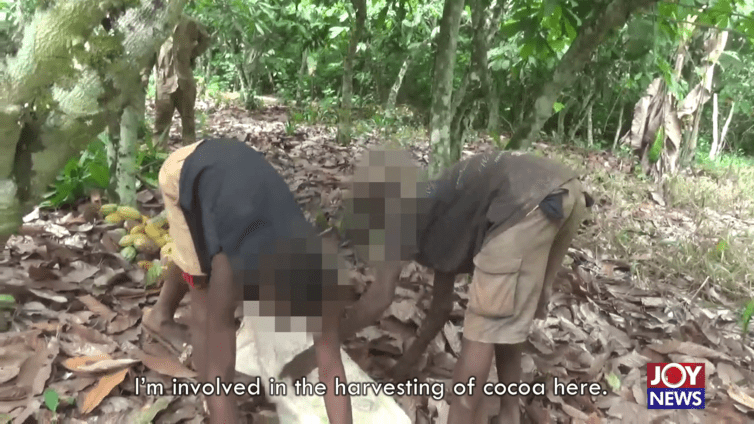 The Head of Human Trafficking at the Gender and Social Protection Ministry, Abena Annobea Asare, says some Cocoa farmers are intentionally breaching the laws concerning the employment of children on their farms due to their need for cheap labour.

According to her, the widespread manner of interventions and programmes to bring education to farmers on the dangers and risks of child trafficking and labour proves that the farmers are well aware of the consequence their actions pose yet do it anyway.

“Over the years if I can take the data from 2015 we could see that we have minimal prosecutions, we have minimal arrests, of course many issues came up in terms of the various faces of trafficking as to the root causes, people complaining about poverty and all that.

“But as we move on with various interventions and issues we’ve realized that yes, as you can see in the documentary, most of the farmers know that using children is a crime, but because they wanted cheap labour, they intended to use the kids,” she said.

She pointed out that “When you investigated you realize that they never use their own children,they went for other children to use them. And so they know the importance of education but decided to deny others this education.”

Joining in the PM Express discussion on the use of child labour on Cocoa farms following a JoyNews Hotline documentary exposing how traffickers hired out children, including 10-year-olds to cocoa farmers for as little as GHC800 to work for a full year, weeding and carrying cocoa beans, she stated that her ministry has been working assiduously to end the canker.

“And so from 2015 coming, we’ve made a lot of arrests in terms of people using children in terms of labour and trafficking them; all the elements in terms of the act, the means and the purpose were present and so these people will definitely go through the law and if they’re found culpable they’ll be prosecuted.

“We’ve prosecuted parents, I think in 2021 two parents actually had 34 years. We can no longer say because you’re a parent – the child is not a commodity that you can pick the child and just sell the child, no.”

She added that the ministry has put in place several support systems for children rescued from such circumstances.

“A lot of efforts have gone in, the human trafficking fund has been operationlised, we have shelters, and so I was glad when you were asking about the safety of the children. As long as the social welfare has been involved and they’re involved, they know the protocols and the standard operative procedures to follow. When victims are rescued we have our shelters which are not disclosed and they’ll go through counseling, they go through all the necessary support that they need,” she said.

She further revealed “over 780 children were rescued this year alone.”

Some of these children were rescued from farms across the country while others were intercepted in transit to these farms.

Abena Asare noted that due to poverty being a contributing factor to the phenomenon, parents who are discovered to have not been part of the trafficking syndicate are either placed on LEAP, or offered complementary support on their farms to ensure that they do not have to traffick children for cheap labour.

“The parents are supported. Recently at Ningo-Prampram over ten parents were supported to establish businesses after our investigations and we realized that they were not part of the trafficking syndicate. We needed to help the home,” she said.