Child labour is multifaceted, we need collaboration to tackle it - Eugene Korletey - MyJoyOnline.com

Child labour is multifaceted, we need collaboration to tackle it – Eugene Korletey 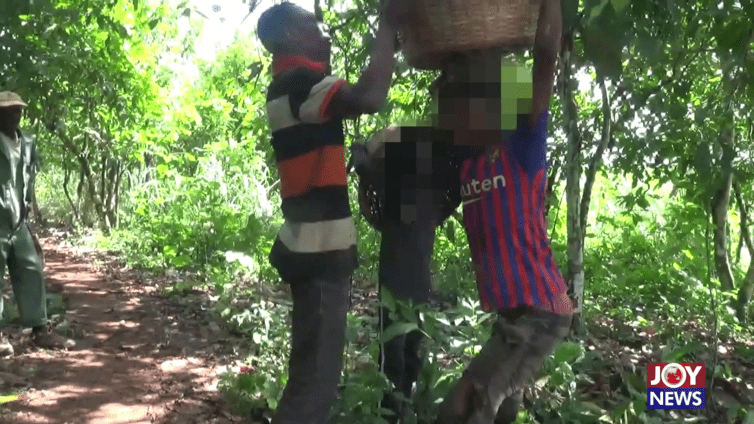 The children are trafficked and bought to endure long hours of drudgery.

The Chief Labour Officer of Employment and Labour Ministry, Eugene Korletey has called for more collaboration between stakeholders in the Cocoa industry in order to eradicate the phenomenon of child labour on cocoa farms.

According to him, child labour and child trafficking are multifaceted cankers that need the collaboration of all and sundry to effectively eradicate.

His comments were in relation to a JoyNews Hotline documentary exposing how traffickers hired out children, including 10-year-olds to cocoa farmers for as little as GHC800 to work for a full year, weeding and carrying cocoa beans.

Speaking on the PM Express, Eugene Korletey stated that his outfit is working assiduously to ensure that Ghana’s ratification of the International Labour Organisation Charter which prohibits child labour is fully realized.

This was after it was revealed on the show by the Head of Human Trafficking at the Gender and Social Protection Ministry, Abena Asare that farmers involved in the child trafficking and child labour syndicate were in it for the cheap labour.

She said investigations into incidents had shown that in an attempt to cut costs, these farmers intentionally breach the laws and hire children.

She called for the sanitization of the employment system, driving attention to the fact that there are more unemployed youth so why are the farmers employing children instead.

Eugene Korletey conceded that over the years due to the rapidly expanding industry, it has created several blind spots for his outfit and thus at the moment, the only way to ensure Ghana does not lose steam in fighting the canker is through collaboration.

He was particularly keen on the media using their platform to help push the agenda.

“The media has a major role to play, when you get wind of some of these. Because as industry is expanding, the coverage becomes very difficult for the Department to reach out to every corner of the country.

“But we expect that if we get volunteered information from our major stakeholders, we’ll be able to reach out to some of these areas and ensure that there is sanity at the employment stage,” he said.