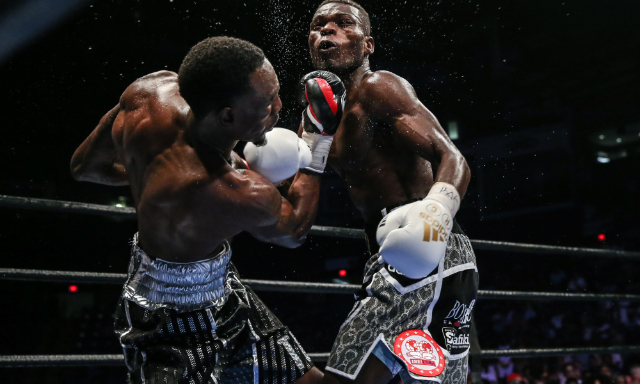 Richard Commey fought hard and fought well, but in the end paid for perhaps not knocking out Robert Easter, Jnr on Friday night in their hugely entertaining bout.

The American is now the new IBF lightweight champion but he and his Ghanaian foe made sure to give the crowd and televised audience a barnburner, as Easter (18-0, 14 KO) edged out a split decision win over Commey (24-1, 22 KO) over 12 rounds.

Both, undefeated before the bout, were angling for a first world title.

“I feel like I won this fight,” Commey said after the results came in. “I did everything that I could. I landed the more accurate shots. I come from very far and it’s hard to win here versus an American. I deserve a rematch.

“I was very devastated when I heard the scores. I knew it was a close fight. He went down and I didn’t," the Ghanaian, fighting on U.S. television for the first time, said.

Easter, Jnr is Commey's toughest opponent in a career featuring victories against less technically gifted boxers. But the 29-year old wants another shot.

“I want to be a world champion. Even if he doesn’t want to fight me, I want another opportunity. I can fight at the highest level in the world. We worked so hard to get to this stage. I want to stay at this level. I’ll keep improving.”

Easter, Jnr again impressed with his technique and sense of range, but he also needs a lot of polishing because he could easily have been beaten by a fighter with a better jab. The American, fighting with a partisan crowd behind him, could not help but be impressed with the brutal nature of the fight, and his opposition.

“This fight wasn’t easy at all,” Easter said. “We knew it wasn’t going to be easy. Richard Commey is a tough, tough competitor. He made me fight each and every round, but we did it.

” … I want more straps. I want more belts. This is huge for my city. It means a lot. It’s bigger than me. I wanted to give them something to believe in.

“All this hard work we had to put in for this fight, we had to dig in deep. I did this for my city and Toledo came out for me tonight.”

The future is bright for the lightweight division, with names such as Mikey Garcia, Dejan Zlaticanin, Anthony Crolla, Jorge Linares and Terry Flanagan. Commey and Easter, Jnr can be added to that list.

But will Commey get a rematch?