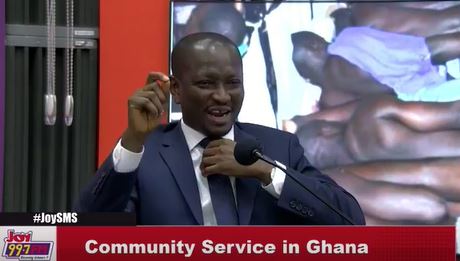 The Deputy Attorney-General, Alfred Tuah-Yeboah, and the Director of Programmes for the Institute for Human Rights and Development in Africa (IHRDA), Edmund Foley, have thrown more light on the Community Service Bill.

According to them, the Bill, if passed into law, will serve as a better reform model for persons who commit minor crimes.

Speaking on the Super Morning Show, on Thursday, July 7, 2022, the Deputy Attorney-General stated that “the Bill is an attempt to make sure that we have a system that will not always send people to jail as it were, to rot, but to also come to the community that they belong to and serve in a more productive way.”

On his part, the Director of IHRDA explained that the overall objective of this Bill is to “look at reforming and rehabilitating people.”

He further noted that the impression should not be created that community sentencing is not deterrent enough because the offender will not be held in Police or prison custody.

“It still remains a sentence following a conviction,” he stressed.

Highlighting other benefits, he mentioned that the Bill if passed, “will bring Ghana in line with a number of the Human Rights Instruments that Ghana has signed and ratified.

“If you look at the spectrum, we are quite a continental leader when it comes to ratification of Human Rights Instruments and keeping up with the implementation of these instruments. So definitely we will be also in line with the minimum standard on non-custodial measures in the Criminal Justice System,” he added.