Coronavirus: Merkel in fresh plea to stay at home amid record infection tally 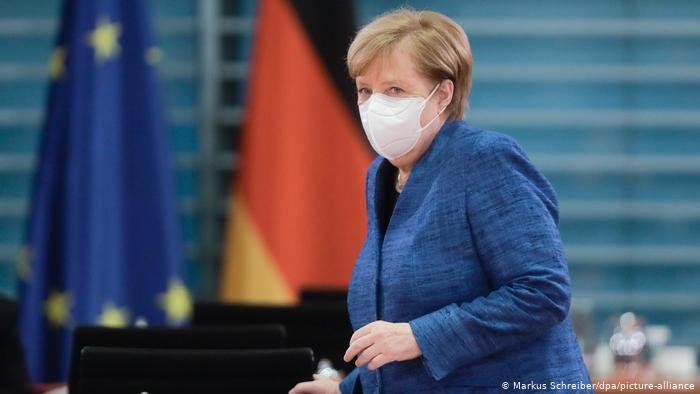 German Chancellor Angela Merkel warned citizens to stay at home and reduce all unnecessary contact and travel after the number of infections hit a new record high. The country’s death toll also passed 10,000 on Saturday.

German Chancellor Angela Merkel warned citizens to stay at home and reduce social contact to an absolute minimum on Saturday, following another notable rise in the number of infections.

“We are not powerless against the virus, our behavior determines how strongly and how quickly it spreads. And the order of the day for all of us is: reduce contacts. Meet a lot fewer people,” Merkel said in her weekly video podcast.

She then replayed footage of her appeal of the previous weekend for people to refrain from both travel and celebrations that are “not really necessary.”

“Please stay at home, wherever possible, whenever possible,” she said.  ”The pandemic is spreading rapidly again, even faster than at the start of it more than half a year ago”.

Germany confirmed a new daily record of 14,714 new cases on Saturday, up from about 13,500 cases the day before, according to data from the Robert Koch Institute for infectious diseases. However, the figure was thought to be inflated due to a technical glitch earlier this week.

The country’s pandemic death toll also passed 10,000 on Saturday. The rise in infections has spurred a number of local measures to be implemented across the country, and officials have warned of a national lockdown.

Germany currently leaves decisions on restrictions to local and regional authorities. Germany’s 16 states are free to impose their own rules, leading to a patchwork of regulations nationwide.

Measures are typically implemented at the local level once infections in a district rise above the threshold of 50 per 100,000 residents.

Those measures include travel restrictions, curfews for restaurants and bars, and tighter limits on social gatherings.

However, many are calling for a return to the nationwide restrictions seen at the start of the pandemic.

Meanwhile, the capital and one of the country’s top virus hotspots, Berlin, implemented new restrictions on Saturday, requiring facemasks in markets and on 10 particularly busy streets, in shopping malls and in queues.

The city is also set to deploy over 1,000 police officers to enforce the new rules.

DISCLAIMER: The Views, Comments, Opinions, Contributions and Statements made by Readers and Contributors on this platform do not necessarily represent the views or policy of Multimedia Group Limited.
Tags:
Angela Merkel
Coronavirus
German
Stay home