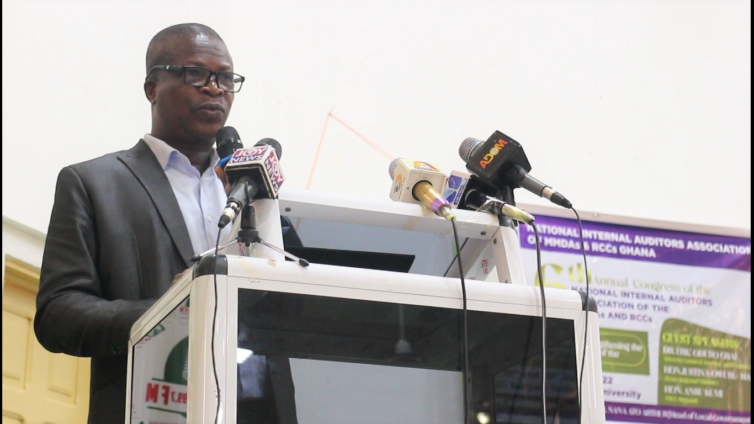 The National Internal Auditors Association says being independent under the proposed internal audit service will strengthen the fight against corrupt practices in the public sector of Ghana.

The president of the association, Michael Ayivi, therefore, has appealed to Parliament and other stakeholders to support the creation and fast-track the process of passing the bill into an act.

This, he insists, would ensure effective delivery of their duties without fear.

Mr. Ayivi spoke at the 6th annual congress of the National Internal Auditors Association of Metropolitan, Municipal, and District Assemblies and Regional Coordinating Councils in Sunyani in the Bono Region, on June 29, 2022.

The two-day congress was on the theme: “Fighting corruption through strengthening the independence of the Internal Audit of the public sector of Ghana”.

He said they would become members of the Internal Audit Service when created and work directly under the Director-General of the Service, who would be in charge of their resources, training, and promotions.

“Our resources would not be determined by our bosses –people we are auditing”, he said and appealed to stakeholders to help bring the bill before parliament into being.

“When we have independence, we are not going to hunt. We would have the freedom to help management without fear or favor. But when there are witches, they must be hunted, or they hunt us”, he stated.

Mr. Ayivi further explained that their delivery, when the bill is passed, would add value to the sectors and help rid them of corrupt acts.

The head of the local government service, Dr. Nana Ato Arthur, in his address, delivered by James Oppong Mensah, the chief director, said the independence of the auditor, though crucial and critical in reducing infractions, goes beyond the creation of institutions.

He said the auditor’s independence resides in the behavior of the personalities and entities involved, which requires integrity, professionalism, and an objective approach to the audit process, rather than the creation of institutions like the Internal Audit Service.

“The auditor should be willingly, ethically, professionally, suppress bias, and report honestly”, he admonished the auditors.

Dr. Ato Arthur, however, assured of efforts among key stakeholders to deepen the independence of the internal audit unit, through constant capacity building, recruiting the relevant staff, in quality and quantity, and continuous sensitization of all stakeholders, including the auditees and auditors, since they are development partners.

Internal auditors ensure that an organization complies with relevant laws and statutes, among other duties. But the Operations Director of the Internal Auditors Agency (IAA), Nathan Yankey, speaking on behalf of the Director-General, Dr. Eric Oduro Osae, said despite the many anti-corruption measures and acts, the act continues to the detriment of the country’s development.

“Effective Internal Audit function which is organizationally and individually independent, professional and well-resourced, would prevent physical acts such as corruption and ensure that the government achieves better outcomes in the utilization of public resources”, he noted.

The chairperson of the congress and Bono Regional Minister, Justina Owusu Banahene, said the internal audit function is a pre-corruption and preventive task that must be empowered to ensure that meager public funds available to institutions are not wasted or mismanaged.

She, therefore, stated that one of the best forms of fighting corruption is to promote the independence of the internal audit.

Participants are being trained by the IAA on the overview of relevant laws and regulations, Audit documentation, payroll audit, and contract and procurement management audit.

The congress would be climaxed with the election and swearing-in of new national executives.