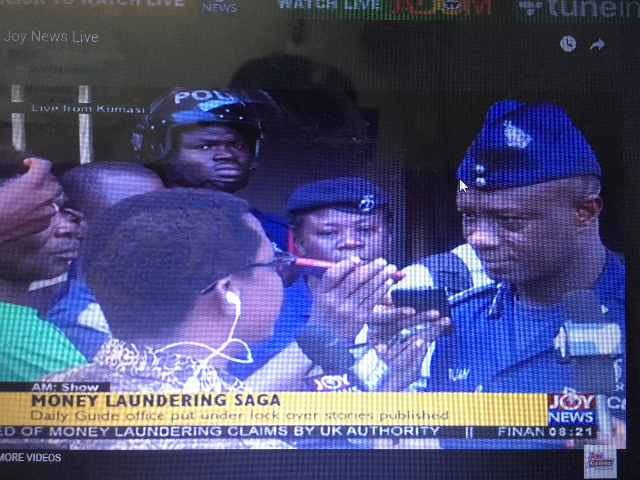 The Daily Guide office in Kumasi was found locked on Wednesday morning by a group calling itself the Kumasi Youth Association due to money laundering stories published by the newspaper.

The group is demanding an apology and a retraction of the stories by the newspaper since they believe the stories defame the name of the Asantehene, Otumfuo Osei Tutu II.

Ebenezer Osei Adu-Poku who is a worker in the building complex that houses Daily Guide in Kumasi told Joy News’ Ohemeng Tawaiah that they found the main door to the building locked with all the inscriptions written around and called the police to that effect.

When asked if he feels secured working there therein, he said, “yes we feel secured because we called the police and they came to settle everything”.

Manhyia Divisional Commander, ACP Kwaku Buah, speaking to on the AM Show on the JOYNEWs channel on MultiTV says he cannot confirm if he will be making any arrests.

He directed the leaders and other members of the group to report to the police station to have a discussion so a civil way will be used to address their grievances.

ACP Buah also said nothing has been reported missing or stolen from the building.

Although the Joy News reporter made efforts to speak to the Manager of Daily Guide in the Ashanti Region, James Quansah, he declined to comment on the issue.

Ibrahim Abubakar, who reports for TV3 in Kumasi called on media houses and security forces to work together to protect journalists because of the nature of their work.

“Definitely someone may be hurt by our report so media houses should be secured so people won’t just come in and go out without proper checks.”