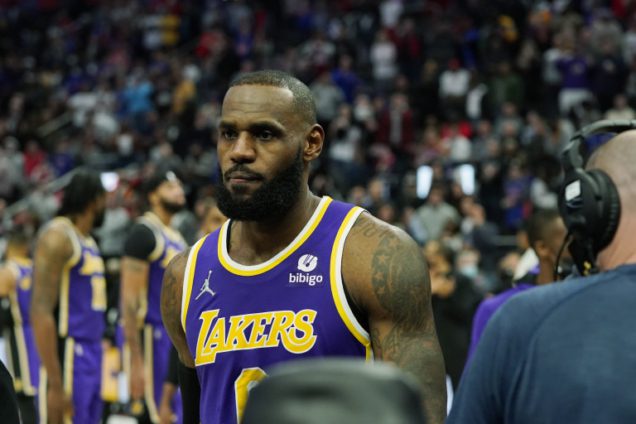 The answer, of course, depends on who you ask.

Looking to avoid a four-game losing streak Sunday, the Los Angeles Lakers were struggling against a bottom-five team in Detroit, down 78-66 to the Pistons with 9:18 left on the clock in the third quarter. But the game was derailed by a LeBron James flagrant foul on Isaiah Stewart II that left the 20-year old sophomore center both enraged and bloodied.

With both DeAndre Jordan and James boxing out Stewart together on a Jerami Grant make at the line, Stewart pushed heavily into James (within the bounds of legal contact). James, off-balanced and on one leg, jerked his left arm back and smacked Stewart in the face with his hand. Stewart fell to one knee for a moment, got up and turned to James for what looked like a typical NBA-level on-court disagreement.

Except Stewart wasn’t going to let it go. With blood seeping from his eye and on his mouth, he raged for several minutes, attempting to get at James and/or any other Lakers player. Credit to teammate Cade Cunningham for doing everything within his power to try and stop Stewart from taking it further. Both James (Flagrant 2) and Stewart (two technical fouls) were ejected. Russell Westbrook was given a technical as well, presumably for escalating the fracas.

The Lakers rallied to win 121-116, but Sunday’s contest was marred almost precisely 17 years after the famous incident in Detroit. Some questions and answers on what transpired:

Did James intentionally elbow Stewart? The ejection would seem to indicate the refs thought so, correct?

It’s always a bit dangerous trying to determine an individual’s intent, but James looked like he intentionally swung his arm to dislodge Stewart from his ribs. It didn’t look like he intended to hit him in the face, and James seemed to be checking on Stewart initially when the young big man was on a knee collecting himself.

From the officials’ point of view, James’ intent is not necessarily the driving force. Was James executing a natural basketball motion? No, that was not a basketball play; it was clearly a flagrant foul. Severity climbs when a player is struck in the face or head. If the contact was accidental but the motion unnatural, the player is going to get a flagrant. The intent isn’t necessarily relevant in that context, just the action.

Should James have been ejected?

Absolutely, as a Flagrant 2 is an automatic ejection. Under a microscope, Stewart might have been guilty of a foul for his contact with James, but that’s a typical physical play while boxing out. It was not insignificant, but certainly not as severe as Kelly Olynyk locking up Kevin Love’s arm in 2015. Love’s subsequent shoulder injury knocked him out for the 2015 playoff run with James and the Cleveland Cavaliers.

James can claim he feared for his health, and his motion was to protect his body, but that would be an argument against suspension, not ejection in-game. Even if Stewart did not have such an explosive reaction, his bloodied face would have led to a stoppage in play, an official review and James would have been ejected.

Did something else set Stewart off beside the foul? Why didn’t he go after James initially when he had him right in his face?

A punch in the face will do that. There didn’t seem to be any significant drama leading up to that moment, other than the Lakers struggling to deal with the young Pistons.

Stewart initially seemed staggered by the blow. It looked like it took just a moment for him to process what had occurred. Once he collected himself, he turned to James with words. When Stewart realized he was bloodied, his rage only seemed to inflame. It was a lot to process, and the NBA will be looking it over very closely.

It’s normal for a player to stand up to another when wronged—turning to James after the initial contact was appropriate, expressing displeasure verbally along with a normal level of physical taunting. The NBA is pretty well known for its “hold me back” type of fighting. Typically, players work too hard to take care of their bodies to put them in harm’s way in a real altercation.

The league tends to be understanding that players sometimes act out of emotion and may even cross the line, but the NBA also expects players to cool down once the initial incident subsides. It’s the escalation, re-escalation, and in this case, re-re-re-escalations that are problematic and inappropriate.

Let the officials handle James’ flagrant. A technical foul would have been appropriate for Stewart. This was way, way beyond the norm.

Does James have any history of cheap shots? Has he ever been accused of dirty play?

James has his fair share of detractors, notably the fans of the many teams he steamrolled through the years in the playoffs. But no, James doesn’t widely have the reputation of being a dirty player.

Anyone who plays for almost two decades will have a small highlight reel of questionable fouls. Still, others have a far-worse reputation dating back perhaps to incidents like a groin punch in college without naming names. James isn’t a high-technical/ejection type player.

What would be the appropriate response from the league regarding punishment for James and Stewart?

This is the most critical question, as it’s not subjective. The league will issue a concrete penalty for both. Guessing what that will be is a little bit trickier. A quick poll of various people in NBA-related positions was all over the map. Some speculated James would get one or two games, but a few backed off that notion when reminded the Lakers next play the Knicks in New York on Tuesday.

For context, Denver Nuggets center Nikola Jokic was recently suspended for one game for a significant shove of Miami Heat forward Markieff Morris. Morris had his back turned to Jokic, and subsequently has yet to suit back up for the Heat with what the team has called “whiplash.”

James can claim the contact to Stewart’s face was unintentional, whereas Jokic clearly went after Morris. Additionally, at his $41.2 million salary, James would be penalized $284,004 a game. Jokic’s penalty was $217,789, and Morris, who started the incident with a Flagrant 2 on Jokic, was fined the maximum of $50,000. If the NBA wants to punish James for more than $50,000, they’ll need to go to the one-game suspension. Two games seem excessive, based on recent precedent.

Stewart’s is a little harder to gauge, as it’s hard to remember the last time a player lost their cool to that extreme. At his $3.3 million salary, he’ll lose $22,601 per game. A four-game suspension would total $90,402 and keep him out of the Pistons’ visit on Nov. 28 to the Lakers in Los Angeles.