Dr Anarfi supports over 5,000 people on the streets 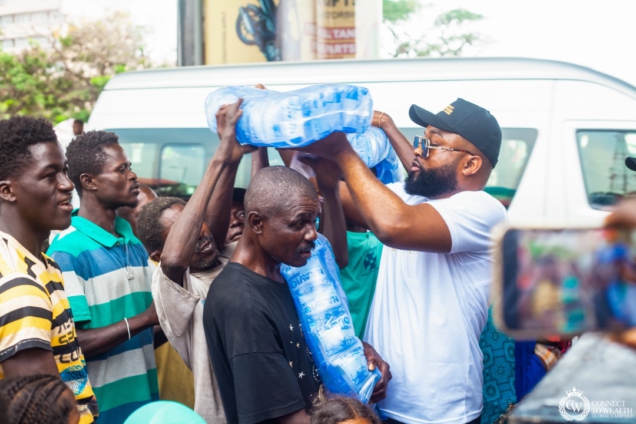 The Chief Executive of Wask Group of Companies, Dr Williams Anarfi, in collaboration with “Connect to Wealth Global Campaign” have supported over 5000 homeless children and porters.

Speaking to the business mogul, he said the purpose of the deed was to impact and reassure beneficiaries to keep their aspirations high in order to change their standard of living during the country’s economic downturn.

According to the 2010 statistics, there are over 90,000 street children and youth in Accra alone, which is the goal of SDG Goal 2, which seeks to end hunger, achieve food security, improve nutrition, and promote sustainable agriculture.

The project was part of Dr Wask’s birthday celebrations, and the organisation cooperate social responsibility, this kind gesture to the less fortunate  was admonished at Nima, Kwame Nkrumah Circle, and Kaneshi.

He was supported by twelve volunteers who contributed to the event’s success.

This year, the annual charity project took to the streets on Friday, November 4 and served the homeless free lunch packs, 100 packs of purified water and also bought some food and beverage vendors’ products without hawking under the sun.

Speaking about the charity project, he said, “It has always been in my heart to give back to the community.” “I understand the whole duty of man is to empower others.” “As a result, we have resolved to go on a charity project, namely, to feed over 5,000 orphans and street kids this Friday”

He added that this kind gesture will be repeated monthly to support the vulnerable in other areas of Accra.

Dr. Anarfi is a dedicated philanthropist who gives back to society through the formation of the WASK Family Foundation, which aims at alleviating poverty and creating a sense of belonging amongst the less privileged in society.

DISCLAIMER: The Views, Comments, Opinions, Contributions and Statements made by Readers and Contributors on this platform do not necessarily represent the views or policy of Multimedia Group Limited.
Tags:
Dr Anarfi
Streetism