Video: The street is not safe, everything goes on here - MyJoyOnline.com

Video: The street is not safe, everything goes on here 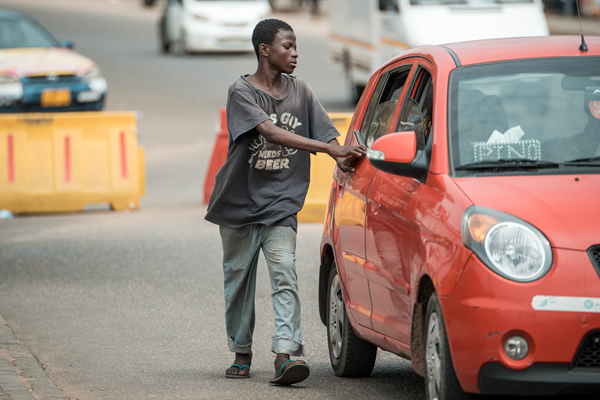 Tales from a series of interviews after hitting the street to detail our findings reveal hidden activities that go on. Two homeless boys told their story and shared their experiences on the street.

We started with Joseph Boateng, who is well known as ‘‘AhoÉ”fÉ›’. He is popular and everyone seems to like him because of his dramatic character.

AhoÉ”fÉ› told Benabi Discovery he came together with a friend from Swedru to beg for money in order to buy food to eat.

HThe 14-year-old boy from Swedru said he makes ¢30 or more by the end of each day. Some give and others don’t. He saves ¢20 and uses ¢10 for food each time he hits ¢30. He usually begs from those in vehicles and those passing by and sleeps on the pavements when night falls.

He further told us about his experiences with drugs, disclosing that he used to take Tramadol. According to him, whenever he takes the drug, he feels like hurting anybody he sees.

The drug possesses him to do anything he felt, at times he felt like smashing his colleagues head with an object. He also said the drug is addictive and you will find it very difficult to quit when it becomes chronic.

AhoÉ”fÉ› told Benabi Discovery he has stolen before, he got away with â‚µ50 which belongs to one woman who sells pure water every afternoon. The woman sent him to go for her bag which has money in it and he flew with it. He was later caught and asked to pay which he paid â‚µ40 and the woman asked him to keep the rest.

He revealed that when he has no money he feels like stealing. He can sneak to a friend and reach out to his pocket to get away with all his money without been caught.

On a flip side, AhoÉ”fÉ› introduced his friend who also shares common experiences.

He said, “my name is Paa Kwesi, I am 14 years old, I have been here for six months, A friend brought me here to seek greener pastures. My family is in Kasoa and none of them knows my where about. I have known Joseph Boateng for some time now. We met in Osu and became friends when we first met, I slept one night and he stole my money. He never knew I was notorious than him. He also slept and I stole his.”

Paa Kwesi later opened up by saying “if we send Joseph Boateng AhoÉ”fÉ› to school a thousand times, he will come back to the street a thousand times. AhoÉ”fÉ› should rather learn a vocation.”

He later said, “we have stolen so many things on the street, I personally steal money, mobile phones etc. When caught, I will be bullied for a while and set free. I stole some in Kasoa and was caught and beaten, was a commercial vehicle conductor by then in Kasoa and I got away with my master’s money.”

He continued by saying, “I used to smoke cannabis but realised it won’t help me so I quit. We had seniors who sold to us. When we take drugs (Tramadol), it dazes us and we felt like engaging in criminal moves. We are more than 100 on the street and there are females among us. I had a street girlfriend but I broke up with her, I don’t give them money. When I get money, I buy her â‚µ5 Indomie (Noodles) and send her to the net at Kanta to have unprotected sex.”

Paa Kwesi lamented that he no longer has interest in going to school. He said in his school days, he was the poorest among his mates and was mostly mocked in class. When he is offended, he might hurt one of them and authorities will flag him as a stubborn boy so he dropped out of school.

“I won’t go to school again. I can learn a job or vocational training. I can learn how to fix cars and bicycles. We will study the job and won’t come back to the street as street boys (Kuborlor) again.”

Watch the full documentary below: