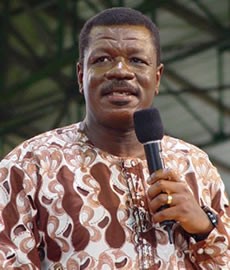 Just as it happens in any matter of political significance in Ghana, all the comments I have heard on Dr. Otabil’s press conference have been very partisan. Of course, the clergy and the church have also jumped to the defense of their own. Read on and tell me where this piece falls after you are done.

This is really the first time when issues that affect the lives of Ghanaians have overtaken personality attacks as the main politicking currency in the run up to an election. It is quite refreshing to see the usual front runners, the ruling NDC and the government-in-waiting NPP, trying hard to outdo each other in terms of who has the better educational policy for the country. In the process, an advert by a group alleged to be affiliated to the NDC, has drawn the respected Dr. Mensa Otabil into the fray.

The truth is that, from a marketing perspective, Nana’s free SHS promise is not only easier to sell than JDM’s “access first” doctrine, but it is also more difficult to fight. The NDC and its surrogates therefore have to use extra-ordinary tools to douse the raging flames of the free SHS fire. Unfortunately for Dr. Mensa Otabil, our beloved pastor, the NDC found one of these extraordinary tools in sermons he had preached some years back. In all honesty, I don’t think the NDC’s intention of using the tape was to bring the renowned pastor’s name into disrepute. They are simply using it to save their political life which stands threatened under the conflagration of Nana’s free SHS agenda.

But let us face it. If the NDC advert created any dent in Dr. Mensa Otabil’s image, then his press conference is no less than a hurricane, threatening to blow the life out of his Living Word. We have heard of how Peter denied Jesus in the bible, but until my head pastor held his press conference, I don’t believe anybody in Ghana would have ever thought someone like him would be forced by any circumstance to put timelines on the validity of his Living Word. His address at the press conference has given me a scary feeling that if God does not intervene, we may just be seeing expiry dates on future editions of the Living Word.

I can still not understand how our beloved pastor lured himself into uncharacteristically using such strong words on those he perceived to have wronged him. I listened to one of the original tapes in question (not the doctored version) and heard the passion with which the pastor spoke against free education. Although he made reference to a politician who was promising free education in his sermon, I do not think he was referring to Nana’s free SHS.

It will however be naïve for anybody to think the NDC would not see political value in such a tape in a season and a time like this. With all due respect, I think seeing such a value is NOT evil and it is NOT mischievous. I would rather have thought that the use of the tape shows how much weight the NDC places on the pastor’s words. If I had spoken those words and someone cared to record them, do you think the NDC or anybody would have used them? No, not from an ordinary mortal like me.

The truth is that if you are a wise man worthy of being quoted, one of the prices you have to pay for your fame and wisdom is that people will quote your wise words to promote their own agenda. Just as the rain from God falls for both believers and non-believers, so shall your wise words be useful to both those you like and those you may not like. My pastor has to know that even though wisdom is a free gift from God, the world has a way of making you pay for it.

And this is just one such small price. I have no shred of doubt in my mind that silence would have been a more golden response from him. I agree with the pastor’s decision to leave the matter to God to fight his cause for him since he does not have an army. This is precisely why he should not have held the press conference. The press may be an effective medium for reaching human beings but not necessarily so in carrying our messages to God. I don’t think God will do anything about it though. He does not fight for us battles we have chosen to fight ourselves.

On the other hand, if I were the one who was wise enough for the NDC or its affiliates to place such a high value on my tape and use it the way they did with my pastor’s sermon, and I strongly felt the need to react, this is what I would say. “Good morning ladies and gentlemen of the press. Many years ago, I made my views on free education known in several sermons I had preached. I am still not a fan of free things because the quality of such things cannot be guaranteed.

However, as a man of God, my faith tells me that with God all things are possible. So if as a nation, we have come to a stage where we see free education as what we need to move Ghana forward, we have to diligently seek the face of God on the matter. I believe He will make it possible in His own time. And if God’s own time happens to fall on December 7, 2012, so shall it be. Thank you for your attention” This is all I would say. I would see no evil, hear no wickedness, speak no unethical behavior nor sense any Machiavellianism.

I also agree with our pastor that if good people don’t speak up against the wrongs of society, we shall end up with a perverse nation. But the good people don’t have to wait until the wrongdoing touches them before they speak up. It is far more impactful to speak in defense of others in the quest to sanitize society than speaking in defense of oneself. Let us hear the voice of the good people on such hot issues as Woyomegate, all die be die, many ways to kill a cat, Kennedy Agyepong’s call for certain tribes to be attacked etc.

Let the wise become the true conscience of society and to do so effectively, they should NOT allow their emotions to overtake their wisdom. I cannot sign this article off without thanking the pastor for the new word “splice” that he has added to my vocabulary. I want to let him know that I will be using it in my future articles and whenever I do, he should not see it as evil, wicked, unethical or Machiavellian.

All said and done, I still love my pastor. One false step cannot be a basis of any serious condemnation. I rather see it as a lesson that will further enrich his already wealthy store of wisdom. I can therefore only say Preach on Pastor and let the Living Word flow!