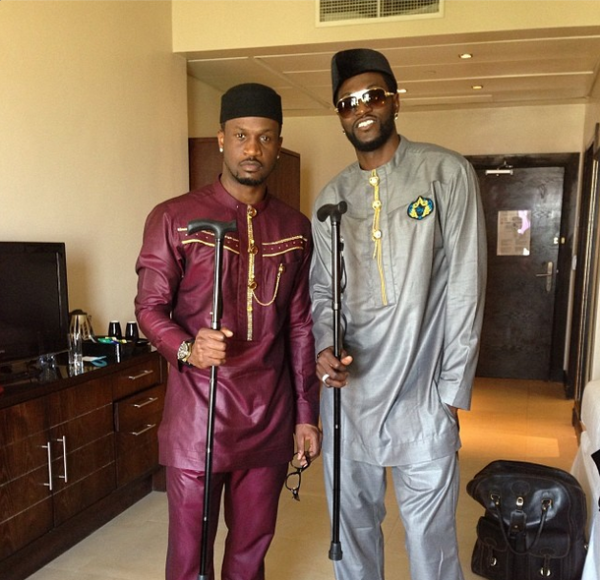 Emmanuel Fimpong, P-Square and Didier Drogba are among those backing Emmanuel Adebayor's latest jabs at his family.

The Togolese footballer, in a sensational post on Tuesday, ripped into his siblings and mother for leeching and exploiting his fame and wealth.

The 31-year-old was granted personal leave by his club, Tottenham Hotspur, last December and has struggled this season, with many noting that the family issues have been weighing him down mentally.

Describing his "dark moments", the Facebook post revealed the financial burden of supporting his family as well as ongoing conflicts. However, he urged his readers to "keep in mind that none of this is about money" and said the "main purpose is not to expose my family members. I just want other African families to learn from this".

In reaction, one of the twins who make up the iconic Nigerian musical group P-Square, Peter, sided with the player, who is a known friend of theirs.

"Thank you for sharing your story bro, that was very brave. Indeed as Africans, the pressure is always on the most successful in the family and it hurts when your efforts are not appreciated and belittled."

"Truth is, you owe no one. Your family should be proud of you and not condemn you."

Also giving his two cents is outspoken Ghanaian footballer Emmanuel Frimpong. The ex-Arsenal man wrote on Twitter: "After reading Adebayor statement with his own family am Blessed to have my family could be worse."

Didier Drogba, who plays for rivals Chelsea but is a close friend of the Togo hitman, said on Instagram: "Talking to you my brother Emmanuel Adebayor made things clear to me! God is with you, stay strong and I hope all will one day go back to what family should be about…love!"

Adebayor's post was bitter at what he says is pressure that African families always mount on the most successful individuals.

Indeed, the player's siblings have been vocal in the Ghanaian media in the past six months. They granted interviews to popular Accra-based radio stations, Peace FM and Okay FM, detailing what they claim to be neglect by the wealthy star.

With Adebayor still trending, his sister Lucia took to Facebook to also respond on the page of YFM.

She wrote: "Keep on lying to the whole world brother. Where is the car you got for mum? You took it back. The house you claim you bought for sister are all lies. The phones Rotimi stole [the player's brother who he alleges stole 21 phones from Monaco ] are all lies."

Lucia went on: "Money is not everything. We the family don’t even need you again. Just be on your own so we do the same. The fact you have it today doesn't guarantee your tomorrow. May God Allah forgive you. You sent your own little nephews packing from your house at 12am. The alphas and Mallams [spiritualists] have done great harm to your life. You need God… Only God can save your soul. Peace."

Adebayor's story has split opinion all over the world, with many believing that footballers must do more for their families, while others feel their hard-earned money should be enjoyed per their own discretion.