The University of Ghana Council has approved a second term for the Vice-Chancellor, Professor Ebenezer Oduro Owusu.

At its meeting held on Tuesday, the Council extended Prof Oduro Owusu’s tenure effective August 1, 2020, to July 31, 2021, when he retires from the University.

This followed the acceptance of the recommendation of a Review Panel that had assessed Professor Owusu’s performance as Vice-Chancellor.

Prof. Ebenezer Oduro Owusu, whose first four-year term comes to an end on July 31, 2020, has led the University of Ghana as Vice-Chancellor since he was first appointed in August 2016.

He articulated a seven-point vision aimed at ensuring financial stability and instilling financial discipline and transparency while creating an enabling environment for academic work to thrive; reformation and transformation of attitudes and mindsets; completing old projects and ensuring new ones are embarked upon; raising a minimum of $20 million and creating an endowment to ensure financial stability, among others. 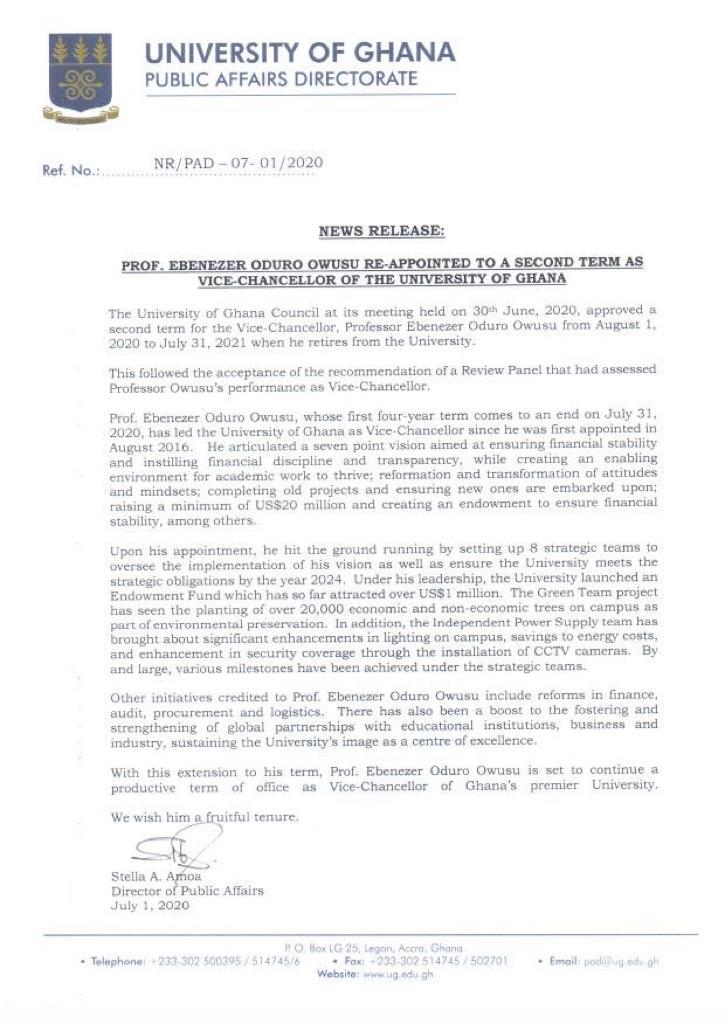 Upon his appointment, he hit the ground running by setting up 8 strategic teams to oversee the implementation of his vision as well as ensure the University meets the strategic obligations by the year 2024.

Under his leadership, the University launched an Endowment Fund which has so far attracted over $1 million.

The Green Team project has seen the planting of over 20,000 economic and non-economic trees on campus as part of environmental preservation.

In addition, the Independent Power Supply team has brought about significant enhancements in lighting on campus, savings to energy costs, and enhancement in security coverage through the installation of CCTV cameras.

By and large, various milestones have been achieved under the strategic teams. 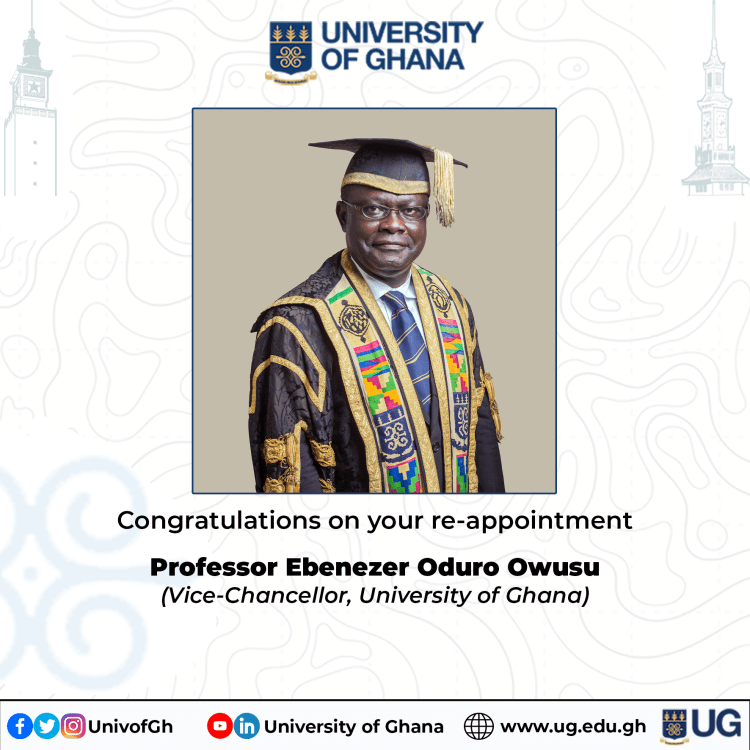 Other initiatives credited to Prof. Ebenezer Oduro Owusu include reforms in finance, audit, procurement and logistics.

There has also been a boost to the fostering and strengthening of global partnerships with educational institutions, business and industry, sustaining the University’s image as a centre of excellence.

With this extension to his term, Prof. Ebenezer Oduro Owusu is set to continue a productive term of office as Vice Chancellor of Ghana’s premier University. We wish him a fruitful tenure.

Meanwhile, Former Director of ISSER, Prof. Felix Ankomah Asante has also been appointed as the Pro Vice-Chancellor of the University, in-charge of Research, Innovation and Development.