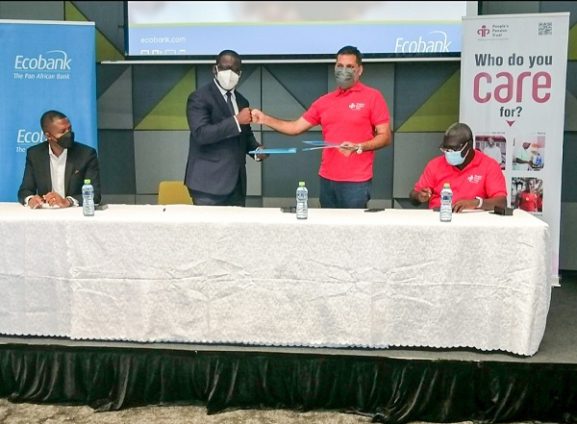 Ecobank Ghana has partnered with the People’s Pension Trust to launch a new digital-based pension scheme that allows clients to contribute towards a comfortable retirement, using their mobile phones.

The product, which is available on the Ecobank Mobile App,  is primarily targeted at the millions of informal sector workers, who constitute about 71 per cent of Ghana’s workforce but are largely not on any pension scheme.

Speaking at the ceremony to sign the partnership deal, the Managing Director of Ecobank Ghana, Daniel Sackey said the new partnership is a testimony of the bank’s commitment to using digital technology to drive financial inclusion.

He also mentioned that Ecobank is resolved to create value for Ghanaians, especially the largely unserved and underserved informal sector.

According to him, the move is a two-edged sword by promoting financial inclusion to secure the long-term welfare of informal sector workers, and unlocking and redirecting capital for long-term national development.

“We know informal workers are concerned about their pension as they see older people going through challenges without a pension. Now Ghanaians are living longer as health care improves. However, because some estimates say over 70% of Ghanaians are employed in the informal sector, many aging informal workers have few options for safeguarding their health and well-being in the long term after they can no longer work,” he said.

Mr Sackey recalled several other strategic partnerships Ecobank had entered into, this year, to make life better for Ghanaians while raising capital for national development, citing the ground-breaking Pensions Back Mortgage Scheme with Enterprise Trustees.

“For us in Ecobank, this year has been filled with many events and partnerships, from the establishment of a partnership with Proparco to support our MSMEs, to loan schemes such as the “Ecobank Auto Finance Scheme” with our Auto partners and the “Pension backed mortgage scheme” with Enterprise Trustees.

“And more recently, to our continuous collaboration with JoyNews to launch the 2021 Ecobank-Joy News Habitat Fair. All these demonstrate our determination to support all our customers, regardless of their area of work and sector,” he said.

On his part, the Chief Executive Officer of People’s Pension Trust, Saqib Nazir said Ghana’s informal sector workers, who are largely underserved with financial services, formed part of the 400 to 500 million in West Africa.

He noted that whereas the risk of extending financial services to the informal sector is high, there is also a huge potential of funds to be mobilised from that sector for national development when they are financially included, while creating value and security for the contributors.

He said efforts at financially including the informal sector, have been a difficult one over the years, but strategic partnerships such as the one between Ecobank and People’s Pension Trust, presented flexible and innovative pension that should enable informal sector workers to easily get on board and secure a future for themselves.

“Through this partnership, both existing and new customers of People’s Pension Trust and Ecobank can be reached with pension services, thus helping to transform individual lives for a better tomorrow. This will have a ripple effect that will drive improvement in the economy,” he said.

He described the scheme as a game-changer and urged Ghanaians to sign on and encourage others to also sign on and secure their future.