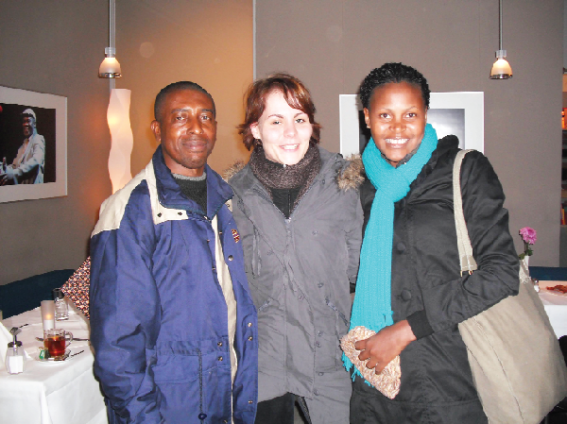 With Sabrina (middle) who welcomed us at the airport and Farida, a course mate

He gave up at a point and asked me to join the rest but the truth was there was no way I could join them – there was no turning back.

Alas! He was saved by the bell when the door finally opened, saying to me “You can now go”, in what I will call German English. Thus, I was the first to enter the big aircraft to Berlin and was welcomed warmly by some pretty German cabin attendants.

My Trip from Ghana

But let’s do a quick back track to how it all started from the Kotoka International Airport (KIA) in Accra.

Starting off from Ghana was not as exciting as when I arrived in the Schengener Staaten (in English, the Schengen State) but I will begin from there, nonetheless.

I arrived for check-in at 6p.m. but couldn’t go back home as I stayed far from the KIA and going back would not have been a wise decision. So I had to endure over five hours of waiting (take-off of Lufthansa flight LH 567 was 11:30pm – eh! Eye asem oh! Small abrokyire wey man go go and so so wahala!

But that was just a tip of the iceberg – wait till you read what I had to endure before finally arriving at my destination.

Soon it was time to board the aircraft at Gate ‘1’ of Terminal ‘2’ and what gave me just a little company was a call from my old folks and a call to my home and a friend. And yeah! I also met a friend who was also off to the US for a high level meeting.

So soon, we boarded the Lufthansa flight straight to Frankfurt and hey, wasn’t I impressed that we actually took off at exactly 11:30p.m. Ghana time?

We spent six hours in the air, enjoying virtually an uneventful smooth flight from Accra, with the cabin crew making sure everyone was alright, arriving at 6 a.m. central time (5a.m. in Ghana).

The landing was smooth and soon we had taxied and we (passengers) were informed we had been given…what was that? Well, since I have forgotten the exact name, suffice me to say an apron – somewhere far from one of the numerous entrances to the arrival hall, which meant we would be transported by bus to the terminal.

But wait! It was not before a German Police Officer – Polizei had scrutinised our passports thoroughly. It appeared that the flight had a clean passenger list, as no one was hauled away for questioning and so we all proceeded to the airport’s arrival hall.

The forty-five-minute flight from Frankfurt to Berlin was smooth and without event, save that I was the only black on board; but no one seemed to notice me.

My worry on what to do on arrival if I did not meet my hosts was abated when at the arrival hall of the comparatively smaller airport, I saw a sweet young white lady holding a large sheet which had on it the inscription InWEnt (organisers of the programme I was attending), in the company of an African and an Asian.

The reaction was spontaneous when I made eye contact with them – they instinctively got to know I was the one they were waiting for.

The lady was Sabrina, a course assistant I had been corresponding with before leaving Ghana, the Asian, Andi, a fellow participant from Indonesia and the African, Louis – the cab driver who drove Andi and I to our residence – a guest house at Zimmererweg (Buckower Damm 91).

I have forgotten the country the driver said he was from but he said he had been to Ghana (Accra, Kumasi and Cape Coast) and enjoyed the country very much.

I must say here that we enjoyed a kingly ride from the Tegel Airport to our apartment in a Mercedes Benz cab, which will be the envy of many in Africa and definitely will not be used as a taxi in Ghana but as a priced possession.

Andi and I arrived at the guest house at approximately 11:00a.m. German time on a very wet and cold morning (about 2 degrees Celsius). Louis said it was negative the previous night.

DISCLAIMER: The Views, Comments, Opinions, Contributions and Statements made by Readers and Contributors on this platform do not necessarily represent the views or policy of Multimedia Group Limited.
Tags:
Edmund Smith-Asante
Life Abroad
Living abroad