Egypt has criticised the United States after it reportedly withheld $195m (£152m) in military aid and cut $96m in other aid over human rights concerns.

An Egyptian foreign ministry statement said the move – which has not yet been announced – reflected "poor judgement".

US officials were said to be unhappy that Egypt's president had recently ratified a new law regulating NGOs.

The law states that NGOs are prohibited from conducting activities that "harm national security, public order, public morality or public health", strictly controls their funding, and gives the government the authority to monitor their activities.

Eight civil society organisations warned in June that the legislation ushered in "unprecedented levels of repression" and would criminalise the work of many NGOs in Egypt, making it impossible for them to function independently.

On Tuesday, the Washington Post cited US officials as saying that Secretary of State Rex Tillerson had notified Mr Shoukry by telephone of his decision to withhold $195m of the $1.3bn Egypt receives in military aid, and to reallocate to other countries $65.7 in additional military aid and $30m in economic aid.

The unspent money would be held in a bank account until Egypt showed some progress on "key priorities" such as human rights abuses and the law regulating NGOs, the officials added. 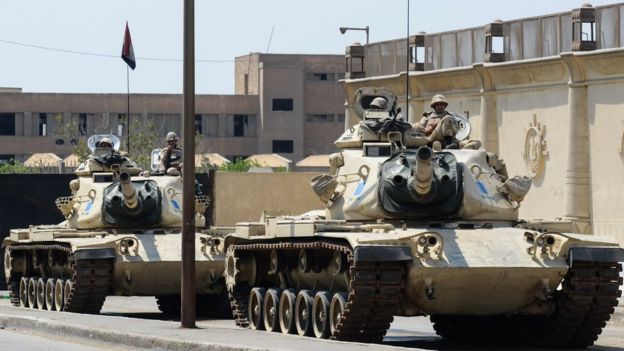 Egyptian officials gave the US assurances earlier this year that the NGO law would never take effect, according to Reuters news agency.

"Egypt sees this measure as reflecting poor judgement of the strategic relationship that ties the two countries over long decades and as adopting a view that lacks an accurate understanding of the importance of supporting Egypt's stability," it said.

A copy of the foreign minister's schedule sent out to journalists also showed that he would no longer be meeting a US delegation led by Mr Kushner in Cairo on Wednesday. No reason was given.

Egyptian President Abdul Fattah al-Sisi has launched a sweeping crackdown on dissent since leading the military's overthrow of his predecessor, Mohammed Morsi, in 2013 following mass protests against his rule. 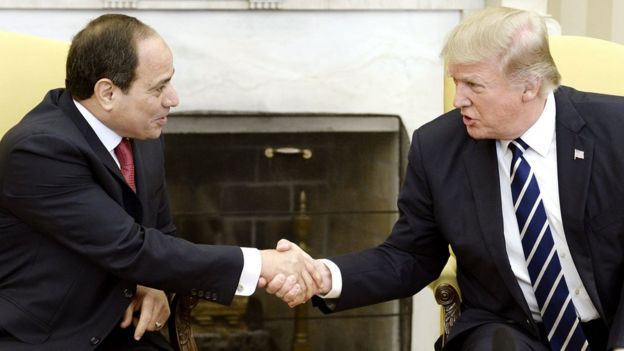 Human rights activists say more than 1,000 people have been killed and tens of thousands arrested since then. Most have been supporters of Morsi and his Muslim Brotherhood, but liberal and secular opposition activists have also been targeted.

The security forces have also been accused of committing flagrant abuses, including torture, enforced disappearances and extrajudicial executions.

Former US President Barack Obama froze some military assistance in 2013. He insisted the restrictions would continue until Egypt showed "credible progress" towards democracy, but ended up restoring the military support in 2015 because it was "in the interest of US national security".

In April, three months after taking office, President Trump said he wanted to "reboot" relations with Egypt and declared that he was "very much behind" Mr Sisi.

Mr Sisi praised Mr Trump's "unique" personality and reportedly sought an increase in the $1.3bn in military aid that Egypt receives annually to him help battle an insurgency in the Sinai Peninsula by jihadist militants from so-called Islamic State.