Ejura Killing Probe: My son was not part of the protest – Mother of 16-year-old amputee 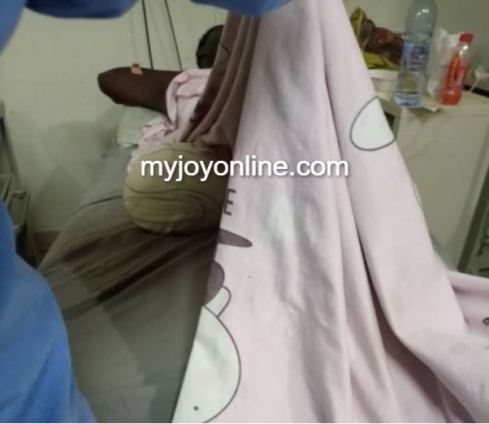 Salamatu Mohammed, mother of Mohammed Awal Misbawu, one of those who were shot in the Ejura clash, has disclosed to the Committee probing the incident, that her son was not part of the demonstrating youth.

Testifying before the Committee Tuesday, she said prior to the incident, she did not know the atmosphere in the town, so she sent him on an errand.

“When we came from Kaaka’s funeral, my son told me he was hungry because he hadn’t eaten since morning. I gave him money to go and buy food. In about 10 minutes, I was called that he has been shot. I was told he has been taken to the hospital.”

Upon receiving that urgent phone call, Salamatu Mohammed said, she rushed to the hospital, but unfortunately, she was denied access to her son.

“At that time, he was in a dangerous situation. He regained his consciousness, and they called me to see him. I entered and saw that he was injured on his leg. The leg had been tied.”

Awal Misbawu, 16, is one of six persons who were shot during a protest which resulted in a clash between the Military and some irate youth of Ejura Sekyedumase on Tuesday, June 29.

He lost his right leg after surgical amputation at the Komfo Anokye Teaching Hospital (KATH).

When asked whether she has any recommendations to government, she said, “He (Awal Misbawu) was fit with his two legs. But now one of his legs has been amputated. I am pleading with the authorities to assist my son to get daily bread for himself. From now onwards, I don’t know what the life of my son would be”.

A three-member Committee has been set up after President Akufo-Addo gave the Interior Minister, Ambrose Dery, 10 days to institute a public inquiry into the incident and make appropriate recommendations.

The Committee is chaired by George Kingsley Koomson, Justice of the Court of Appeal. The Members are, Security Analyst, Dr Vladimir Antwi Danso, Juliet Amoah, Executive Director of Penplusbyte, a civil society organisation.

Upon request, the deadline for the submission of the Committee’s report has been extended to Friday, July 16.

DISCLAIMER: The Views, Comments, Opinions, Contributions and Statements made by Readers and Contributors on this platform do not necessarily represent the views or policy of Multimedia Group Limited.
Tags:
Ejura killings
Ejura youth protest
Ejura-Sekyedumase
Military brutality