Election petition: Supreme Court should caution parties on their commentary after proceedings – Dwomoh 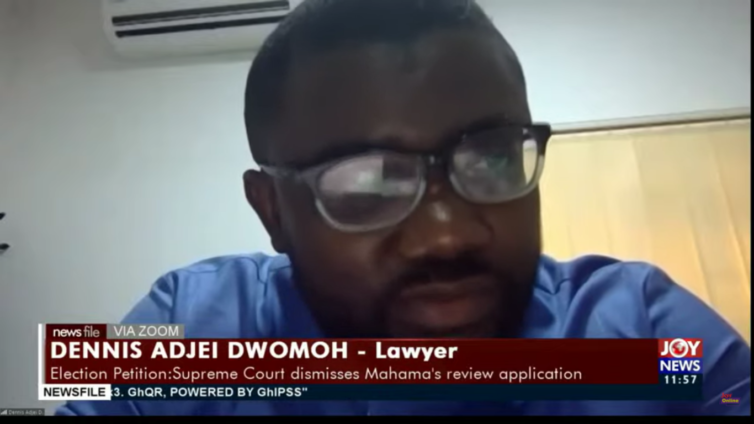 A private legal practitioner has asked the Supreme Court to warn parties involved in the ongoing election petition to be circumspect in their commentary after a hearing.

Speaking on Joy FM’s NewsFile Saturday, Dennis Adjei Dwomoh observed that the explanation of the various legal teams at the end of every proceeding could obstruct or interfere with the orderly administration of justice

He, therefore, called on the legal counsel to allow the Apex Court to work.

“We have to allow the court to work and possibly even if practitioners will comment on it, I think it should not be immediately after coming out of court because when they come out of court immediately, the adrenaline is high and they sometimes make certain statements.

“So I hope that the court will caution both parties in terms of their expressions that they have made. Because if you look at the news report, most of the reports take the toll of the commentary that was rendered by the parties’ legal practitioners,” he explained.

To further augment his opinion, Mr Dwomoh cited the 2013 election petition, where the panel adjudicating the case reprimanded persons who openly censured the Court for some of their rulings.

According to him, commentary on the case by the parties “became more friendly” and must be repeated if that is what will help the court to adjudicate the issue without undue criticism.

Mr Mahama on December 30, 2020, filed a petition at the Supreme Court seeking to set aside the results of the election that went in favour of the NPP’s Nana Akufo-Addo.

According to the former President, the votes obtained by New Patriotic Party (NPP) candidate, President Nana Akufo-Addo and himself in the December 7, election as declared by the EC Chair were not enough to be declared winner.

“The percentage attribute to all but one of the other candidates by Mrs Jean Adukwei Mensa were all incorrect,” he said.

The former President argued that if all the valid votes for all the candidates who contested the election are put together, it would total “13,121,111, a figure that is completely missing from the purported declaration by Mrs. Jean Adukwei Mensa on December 9, and the purported rectification on December 10.”

Mr Mahama said the percentage of all the valid votes for the 12 contesting candidates “would yield a total of 100.03%.” This he said is a “mathematical and statistical impossibility, a further proof of the wrongfulness and unconstitutionality of the purported declaration.”

DISCLAIMER: The Views, Comments, Opinions, Contributions and Statements made by Readers and Contributors on this platform do not necessarily represent the views or policy of Multimedia Group Limited.
Tags:
Dennis Adjei Dwomoh
Election Petition 2020
Supreme