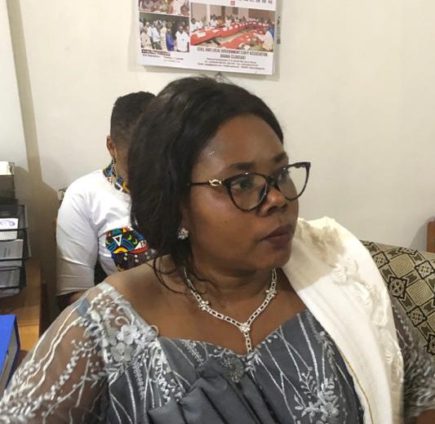 The only female nominee by President Akufo-Addo for the MMDCE role in the Volta Region has been finally confirmed.

After being rejected in the first voting process, Miss Emefa Adzimah managed to secure 20 out of 22 votes during the second voting process.

Miss Emilia Emefa Adzimah in a speech after her confirmation said she will be responsive to the socio economic development of the district.

She noted that Agortime Ziope District has seen a lot of progress during the tenure of her predecessors and she will continue from where they left of.

In order to carry out her promises, she called for unity among the people and also support from the the assembly members and stakeholders.

“I wish to assure all present and most especially the good people of Agortime Ziope that I will do my best to ensure that Agortime Ziope will see immense development during my tenure, “Miss Adzimah added.

On his part, the Volta Regional Minister, Dr Archibald Yao Letsa commended the assembly members for confirming the only female nominee and urged them to help her achieve the purpose she was nominated for .

DISCLAIMER: The Views, Comments, Opinions, Contributions and Statements made by Readers and Contributors on this platform do not necessarily represent the views or policy of Multimedia Group Limited.
Tags:
Agortime Ziope District
Dr Archibald Yao Letsa
Emilia Emefa Adzimah