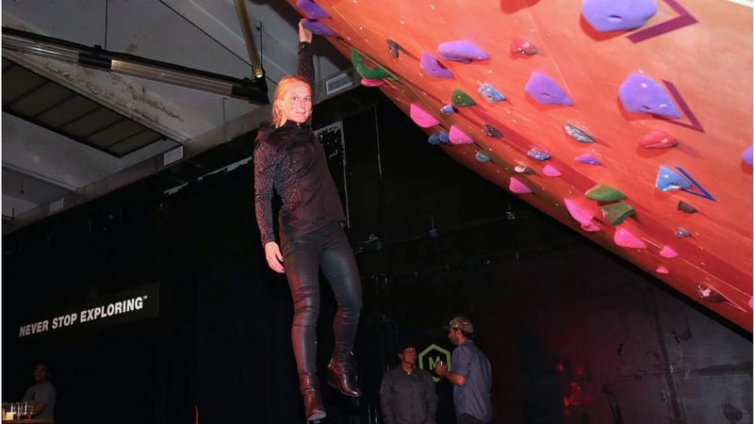 American Emily Harrington has become the first woman and fourth person to ever free-climb Yosemite National Park’s famous El Capitan within a day.

Ms Harrington’s history-making achievement comes a year after she was sent to hospital with injuries after a 150ft fall during an El Capitan climb.

Free-climbers do not use ropes to ascend, but have them for safety.

“I never believed I could actually free-climb El Cap in a day when I first set the goal for myself,” the 34-year-old wrote on Instagram.

“Impossible dreams challenge us to rise above who we are now to see if we can become better versions of ourselves.”

Ms Harrington embarked on the Golden Gate route with her boyfriend, Mount Everest guide Adrian Ballinger, and renowned climber Alex Honnold, who made history when he scaled El Capitan in 2017 solo and completely unassisted.

The trio began their climb at 01:34 on 4 November – just after Election Day in the US. Ms Harrington noted she was caught between her own “internal drama of achieving a life goal” and that of the election as they began.

Golden Gate ✨ Free 💫 In A Day ⚡️ 📸 @jonglassberg / @jess_talley / @louderthan11 I never believed I could actually free climb El Cap in a day when I first set the goal for myself. It didn’t seem like a realistic objective for me. I didn’t have the skills, fitness, or risk profile to move so quickly over such a large piece of stone. But I chose it exactly for that reason. Impossible dreams challenge us to rise above who we are now to see if we can become better versions of ourselves. On Nov 4 I started climbing with @alexhonnold at 1:34am, caught between my own internal drama of achieving a life goal and the more prevalent one of the elections – both unfolding in parallel ways in my brain. I knew I was in for a big day – but that’s exactly why I was there. I wanted to find my limit and exist in it and fight beyond it. A nasty slip on the 13a Golden Desert pitch almost took my resolve – a deep gash on my forehead left me bloody and defeated. I pulled on again, part of me not really wanting to stay on the wall, the other part gathering courage and flow. I kept thinking “why am I still hanging on?” The next pitch was the A5 traverse, where I failed last year. This time it was not my limit. I fought hard but with flawless movements in the dark. I cried at the belay – it could happen this time….The final 5 pitches felt scary in my current state but I pulled over the final lip at 10:30pm in disbelief. There’s a lot more to say but mostly I wanted to express my gratitude for the love and support from friends, family, and strangers. I feel the love so intensely right now. Thank you all 🙏🏻 Massive thanks to @alexhonnold for climbing with me over these years, you’ve inspired me to think bigger and believe in myself in ways you cannot imagine. To @jonglassberg for your friendship, creativity, and ability to capture a story while at the same time keeping it light and always fun. And finally to my best friend, partner, lover, fave human of all time @adrianballinger – your support and love for me through the darkness and the light has never wavered. I love you endlessly ❤️❤️❤️ More to come!!! @thenorthface / @kodiakcakes / @petzl_official / @lasportivana

During her attempt this year, Ms Harrington fell again – she ended up with a bleeding wound above her eye, but kept pressing on.

She described it in her post as a “nasty slip” that “almost took [her] resolve”.

“A deep gash on my forehead left my bloody and defeated. I pulled on again, part of me not really wanting to stay on the wall, the other part gathering courage and flow.”

Photographer and climber Jon Glassberg, who was there to document the journey, said in his own post about Ms Harrington: “I have not seen toughness like this in climbing before and likely won’t again.”

Have you ever teetered at your limit for hours, uncertain of whether your mind and body can achieve something you have spent years dreaming of? @emilyaharrington existed in her mental and physical limit for a long time during her 21 hour “in a day” ascent of “Golden Gate” (VI 5.13) on El Cap. She slipped and fell, ripped gear, took another massive fall and smashed her head into the rock, covering the belay and wall in blood, rested in a portaledge for an hour, found something inside herself, deep down, and got back on the horse to complete the pitch. I have not seen toughness like this in climbing before and likely won’t again but damn, it was awesome to be a part of. Thanks for the journey Emily. Let’s all just take a breather for a minute, K? #louderthan11 @louderthan11

It used to take weeks for rock climbers to reach the top of El Capitan, even with the aid of a partner and climbing aids.

In recent years, three others – all men – have managed to climb the granite monolith within a day.

Ms Harrington told the San Francisco Chronicle it was important to her to become the first woman to do the same.

“I spent a lot of years feeling like I didn’t belong, like maybe I hadn’t earned my place to be a Yosemite climber,” she told the paper. “But throughout this experience I learned that there is no belonging or not belonging, no formula to achievement up there.”