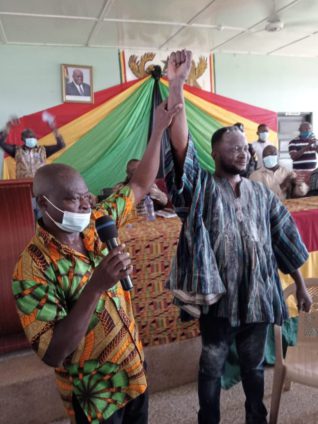 Assembly members for Krachi West Municipality in the Oti Region have confirmed the President’s nominee, Emmanuel Kajal Jalula, as the Municipal Chief Executive (MCE) for the Municipality.

The new MCE, after the confirmation, said there is the need for stakeholders to collaborate with the assembly to ensure that developmental projects started by the outgone MCE, Osei Nti Douglas, is seen to completion.

He noted that development is the bedrock of every government hence the need for all to come on board and develop the Krachi West Municipality.

He promised to operate an open-door policy during his second tenure and bring more development to the District.

Emmanuel Kajal Jalula promised to ensure that women are given equal rights and opportunities, especially in agriculture and entrepreneurial programs.

The Oti Regional Communication Director, Seidu Musah, was impressed about the process so far in Oti Region and hopes that everything goes smoothly as planned in other districts.

The outgoing MCE, Osei Nti Douglas, congratulated the new MCE and also urged the assembly members to support him to work for development.

Before the confirmation, Oti Regional Minister, Dr Joshua Makubu, urged the assembly members to massively endorse the President’s nominee for the needed development in the Municipality.

Dr Makubu, however, appealed to the assembly members to help the new MCE achieve the goal of developing the Krachi West Municipality.

Dr Makubu said government is committed to making sure that the Oti region is transformed into one of the best regions and given the needed development.