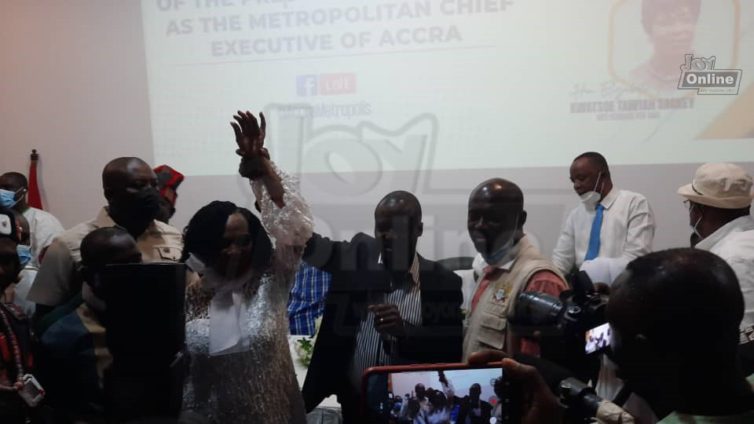 The MCE nominee for the Accra Metropolitan Assembly (AMA), Elizabeth Kwatsoe Sackey, has been confirmed by the assembly members.

Having been approved, she becomes the first female Mayor of AMA.

Kwatsoe Sackey got a ‘Yes’ from all the 33 assembly members of AMA who voted on Thursday.

She is, therefore, to succeed the outgoing Mayor, Mohammed Adjei Sowah.

Prior to her nomination, some NPP youth in the Odododiodoo constituency of the Greater Accra Region, staged a demonstration on Saturday, September 18, 2021, to express their displeasure.

According to the protesters, they would rather the outgoing MCE Mohammed Nii Adjei Sowah is maintained.

But Mr Adjei Sowah condemned their act and disassociated himself from the protest.

In a statement, he declared his support for whoever President Akufo-Addo would nominate.

“We should recognize the President’s authority to nominate individuals of his choice to promote his agenda, and it’s our duty to support the appointees to succeed…

“I totally support all the President’s nominations and commit to continue to work towards the development of the country,” he said.

Elizabeth Sackey is a former MP for Okaikwei North on the ticket of the NPP. She hails from Asere-Accra in the Greater Accra Region and was born on May 6, 1958.

Madam Sackey was the deputy minister for the Greater Accra Region from 2017 to 2020.

She holds a Certificate in Marketing, which she obtained in 2003.

She worked with Ghana Commercial Bank as Chief Clerk before becoming an MP. She is a Christian and fellowships with the Church of Pentecost and is married with four children.

DISCLAIMER: The Views, Comments, Opinions, Contributions and Statements made by Readers and Contributors on this platform do not necessarily represent the views or policy of Multimedia Group Limited.
Tags:
Accra mayor
Elizabeth Sackey
MCE Confirmation